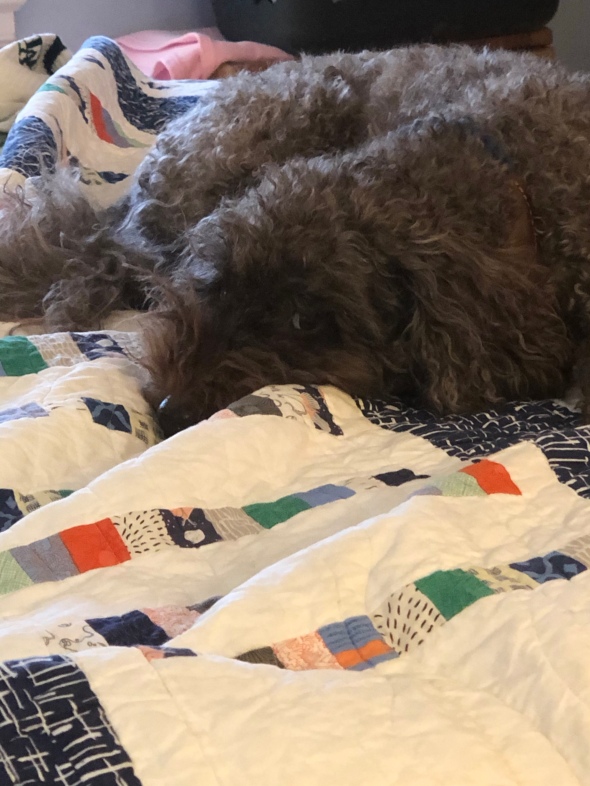 Back in the 60’s, 70’s and 80’s, I used to listen to records on my stereo. It wasn’t just music I used to listen too, but also comedy albums. There was something so wonderful about hearing George Carlin’s voice over and over again saying the seven dirty words you couldn’t say on TV.

One of my favorite comedy bits that I listened to incessantly was one that Joan Rivers did about her personal hygiene preparation before she went to visit the Gynecologist. At the time I had never been to a gynecologist, but I had no problem relating to the cleansing, perfuming, and dressing just to come in and take it all off and lie down on the table. Somehow I feel like this experience is so universal that it also applies to my dog.

For the last couple of days Shay has been licking her belly. Something was obviously bothering her. She was creating raw skin and mats that just pulled at her poor red skin. After a rough night last night I called the vets today to get her an appointment.

In my personification of my dog, I told her that she was going to visit the doctor. She gladly jumped in the car, but as we drove closer to the vets she began to shiver, suddenly realizing where we were going. I think the memory of having your temperature taken anally sticks with you.

As we got out of the car Shay started to pull towards the door, but then veered to the side as if she just decided to go potty. This part reminded me of Joan Rivers routine. Do anything possible to make sure you weigh as little as you can when you go to the doctors.

Shay knows the routine at the vet and as soon as we went into the little exam room she went and stood right on the scale and turned her head up so I could remove her leash. How did she know that could add an additional few ounces to her weight?

After weighing in at her normal steady 22 pounds she jumped up on the human bench next to me and sat with perfect posture awaiting the doctor. If only she had on a pill box hat and white gloves.

Thankfully her condition was not dire and hopefully an anti itch pill will be all she needs to give her poor skin a chance to heal without anymore licking from Shay. She pranced out of the exam room with a certain smugness that she was superior to other more listless dogs in the waiting room. Was she channeling the ghost of Joan?