To me there are a few perfect foods, asparagus, lemons and Parmesan cheese being three of them and they happen to work perfectly together.

I did not make this perfect dish up, but some ancient Italian gets the well deserved credit, but I did cook it today and thought if you have never had it you would want to eat it right away, especially now that we are entering spring asparagus season.

Juice and zest of one lemon

Cover a cookie sheet with foil and spray it with Pam.  Cut the tough ends off the asparagus and lay it on the foil in a single layer.  Roast in the oven for about 15 minutes until the asparagus just starts to brown.  If your asparagus is thin, like a pencil cut the cooking time down, if it is thick increase it.

Pull the cookie sheet out of the oven and sprinkle the asparagus with the cheese and put it back in the oven for five more minutes.

Remove from oven and squeeze juice of lemon all over it and dust with the zest and cracked black pepper. 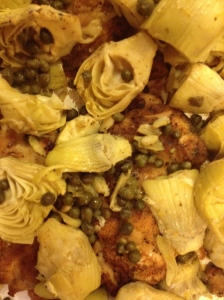 I used boneless, skinless chicken thighs because they just have more flavor than chicken breasts, but feel free to use either.  I place the chicken between two pieces of plastic wrap on a cutting board and using a meat mallet I pounded the chicken to about half an inch thick.

3 T. Wondra – or all purpose flour

1 lemon’s worth of juice and zest

After pounding the chicken, sprinkle both sides with Wondra, or flour and salt and pepper.

Heat a non-stick fry pan on high heat and spray with Pam; turn the heat down just a little.  Place only as much chicken in at a time so that the cutlets don’t touch each other.  Cook on one side until golden brown, about 3 minutes.  Flip over and brown the next side.

Put the chicken in a shallow pan in a 300º oven to finish the cooking for about 15 minutes.

Once you have cooked all the chicken.  Put the artichoke hearts, capers, lemons and lemon zest in the same fry pan without cleaning it out of any browned bits left from cooking the chicken.

Heat the artichoke hearts on medium high heat for about 5 minutes and pour over the chicken.

Cook the chicken in a Dutch oven.  After browning the chicken deglaze the pan with a cup of white wine.  Add chicken back to the pan and add the artichoke hearts, lemon juice, zest capers and 1 cup of chicken broth.  Bring pot to a boil and reduce to simmer cooking for 15 minutes until chicken is cooked through.

Chiffon’s are something Betty Draper might have made if she cooked.  It is a little like a dairy-less ice cream. But when I served this dessert last night Carter thought it looked like something out of Dr. Seuss beacuse of its strong purple color.  I have cut out sugar from my diet, but still imbibe in man-made sweetness.  If you have a moral opposition to Splenda throw caution to the wind and use sugar.  The Splenda version has only about 25 calories per serving.

Four cups Blackberries – you can use other berries, but I am unsure how blueberries will do

1 Cup Splenda for cooking –measures the same way as sugar.

Put the Black Berries in the Cuisineart and pulse until obliterated.  Put a wire mesh sieve over a bowl and pour the blackberries into the sieve.  Using the back of a big spoon push as mush liquid through the sieve as you can.  It will take a little work.  Throw away the skin and seeds left in the sieve.

Add the lemon juice to the berry juice.

Put the egg whites and the salt in a stand mixer and beat them on high just until they are frothy.

In a small saucepan put the water and the Splenda.  Bring to a boil and while hot turn the stand mixer on high and pour the hot liquid in a thin stream into the egg whites.  Beat until they are stiff.

Remove the mixing bowl from the stand and fold in the blackberry-lemon liquid.

Spoon into ramekins.  Place them in the freezer for at least 6 hours.

Note:  If you use sugar bring it to a boil with the water and boil it for 3 minutes without stirring

My garden is spitting out squash like the Duggers do children, but nothing else is producing yet, so I am sorry for yet another Zucchini recipe.  But you won’t be sorry if you make this one.

I was making Russ a loaf of Zucchini bread, but I grated too much zucchini and had to think of something to do with it.  While looking at the shreds in the Cuisineart I thought it looked a lot like grated potato for Latkes.  So here is the out come.

These can be used as a side dish or tomorrow I am going to re-warm them and put a dollop of Greek yogurt and a sliver of smoked salmon on them and serve them as an appetizer to my Cousin and his wife who are coming for dinner.

Juice of one lemon and zest of half the lemon

1 egg and one egg white, beaten

Grate the Zucchini in the food processor and put into a colander and sprinkle with all the salt.  Mix it together.  Place colander over a bowl to catch the liquid that is going to drain out of the zucchini and let it sit for half an hour.

After draining hold colander under the running water in the sink for just a moment to rinse off a little salt.  Put a paper towel on top of zucchini in the colander and press it down pushing as much water out of it as possible, turning the squash a couple of time.

In a large mixing bowl beat the egg and egg white together and add all of the ingredients except the pam.

Heat a non-stick fry pan on medium high.  When it gets hot spray Pam in the pan.  Drop spoonfuls of the zucchini mixture into small rounds and press them down a little.  Cook for about one minute on the first side and then flip them and press down again and cook the second side about a minute.

I only do about 5 at a time so they are not crowded in the pan.  You can keep them warm on a cooling rack set on a cookie sheet in a 250º oven if you want to serve them right away.

Or you can wrap them up and refrigerate them and reheat them on a cooling rack set on a cookie sheet in a 325º oven until they are warm – probably about 10 mins.

I used the Latkes as the base of an hors d’oeuvre.  I put a dollop of Grreek yogurt and a sliver of smoked salmon on top they were great.  Russ then ate the leftovers for breakfast and added capers making them even better