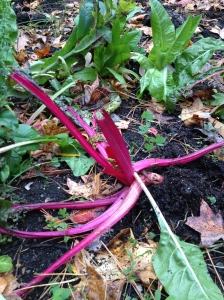 Today my friend Stephanie came over for lunch so we could work on a project together.  I’ve been a little busy and have not been to the grocery and at noon it dawned on me that I needed to find something for lunch.  I often have bits and pieces of leftover meals, which are not enough to serve two.

After searching the fridge I came up with some roasted butternut squash chunks, roasted pear slices, grilled onions, roast tomatoes from my summer garden and a small wedge of blue cheese. I also had containers of chicken salad and pimento cheese, which would be great for Stephanie since she is not on a weight reduction plan, but not so good for me.

Based on what I had on hand I did not really have a meal for me and my guest would surely like something a little healthier than what I found.  The answer to my problem was just outside my door, my fall garden full of lettuce and arugula.

With my kitchen shears and basket in-hand I went out and cut the beautiful tender leaves of butter lettuce, red leaf, romaine and a couple others volunteers as well as my favorite spicy arugula.  A couple of rinses and spins in the salad basket and I had a most delicious base for a fabulous salad.

Growing these lettuces could not be easier.  I literally threw the seeds of arugula in the dirt and sprayed water on them.  I bought a couple of lettuce plants at the local Southern States and for $1.29 I have gotten at least $10 worth of lettuce.  I have not done anything else to help these plants along.  No fertilizing, weeding or watering.

It is not just the cost savings that is wonderful, but the flavor and freshness of the just picked vegetable can’t be rivaled.  To me the convenience of having the food right outside my door is also a huge bonus.  I only pick it if I am going to eat it for that meal.  Not like some food I buy and put in the fridge and forget about it until it has turned into an inedible liquid.

I have a much greater appreciation for farmers who toil over the food we buy in the store.  Lack of rain, too many caterpillars or even cute furry bunnies that think this food is grown just for them are just some of the problems they have to deal with.  There is nothing more fun than bringing a small child to my garden and letting them taste a cherry tomato right off the plant.  They think it is magic.

If you have a sunny spot, even if it is just a pot, try growing some lettuce.  It is fast and easy which is a good description for a vegetable, not your son’s girl friend.  You only need a few weeks of non-frosty nights.  If it gets too cool try it in the spring, no green thumb necessary.

When you are doing your best to lose weight there are entire aisles of the grocery store you have no business visiting.  In fact, you hardly ever go down any aisle in the middle of the store and tend to hug the outside walls hunting for exciting fruits and vegetables and maybe a new yogurt or fish.

Despite the many recipes as I create to keep the food boredom at bay and to have something new to post on this blog I still have a few standby foods that I eat often.  For instance, when I am home I eat the same breakfast everyday, High Protein Special K with berries or peaches and skim milk from our local dairy Maple View Farms.   The next most popular meal is Arugula salad with chicken, blue cheese and balsamic vinegar.

I am practically religious in my stocking of these food items in my kitchen.  The Special K is usually not a problem because it goes on sale every 12 weeks like clockwork and I buy 8-10 boxes every time it does.  All the other items are fresh foods which means I am doing a real balancing act to buy enough to have around and not too much that it goes bad before I can eat it.  I can’t exactly eat more just because it will spoil soon.

So this week arugula was on sale at my local grocer, which meant that it has been sold out all week.  I have visited the store everyday with no luck of finding any.  The produce manager and I are practically dating since I am there so much discussing the delivery schedule from Earthbound Farms.  Insider word is that the entire grocery chain is out of arugula and won’t be getting any before the sale is over.

At this point I don’t give a wink about the sale.  I am just in need of my staple item.  I think that dieters should be allowed to register 5 must-have foods with their store with the promise to always have them on hand if the dieter agrees to buy them every week.

The store can have a kind of secret backroom for these items, or a password the dieter would whisper over the deli counter.  Maybe dieters could have a signal like Paul Newman gave Robert Redford in The Sting.  One swipe on the side of your nose with your pointer finger means bring out my secret skim milk, even though you are sold out of it in the milk case.

It seems like the humane thing to offer.  Its not like I can say, “What no chicken, I guess I’ll have pasta instead.”

If you own a grocery store, especially if your name is Harris Teeter, be the first to start the Dieters Food Club and ensure the calorie deprived among us get what little we are shopping for.