At last the weather has been cold enough to jump-start my desire for soup. I love soup all year long, but there is something about the first cold snap that makes me happy to just have a big mug of soup for dinner.

Maybe it was from the years we lived in London. Cold and usually wet were the weather of most days. Since Russ and I worked many hours a day there was not a lot of cooking going on. We came to depend on the Covent Garden Soup stand in Euston station that was conveniently next to our office in Grant Thornton House. I can’t remember all the soups we used to get, but I can say we never had a bad one. What I learned from them is that soup could be satisfying as a meal unto itself. Of course they also included a hunk of crusty bread to eat with our soup, but even forgoing that today I was happy with this concoction.

1 head of cauliflower broken into florets

Put the Bacon in a stockpot and cook on medium high heat until almost crispy. Pull the cooked bacon out and set aside leaving the bacon grease in the pot. Add the onion, garlic and carrots and cook for five mins. Add the chicken stock and bring to a simmer. Add the cauliflower and thyme, reduce heat to simmer and cover. Cook about 15 minutes or until the cauliflower is soft.

Remove from heat and fish out the fresh thyme if used. Using a stick blender puree the soup adding the milk to ensure you have enough liquid.   When smooth add the cayenne and lots of black pepper and the cheese.

Serve with a few of the bacon lardoons on top.

Eat and imagine you live in London. 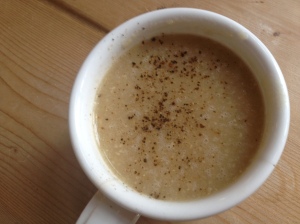 For the first time I have grown Cauliflower in my winter garden.  For the longest time I had beautiful plants, but no heads of cauliflower.  Being a novice at winter gardening I just thought I had missed the window of opportunity until one day I saw these beautiful white brain like bulbs sprouting under the big green leaves.  I waited and watched and decided that one was big enough for me to cut.

Since most people who live in my house hate cauliflower I decided to make soup, which I can get them to taste and love before I disclose the main ingredient — As long as they try it before reading the blog.

This can be made vegan by substituting vegetable stock for my chicken stock.  I used raw cashews as a surprise flavor.  You can you roasted if you want, but I was using up what I had.  If you want you could also substitute Parmesan cheese for the cashews.

1 head of cauliflower – broken up

¼ c. of ground raw cashews- I ran them in the food processor to grind them

Salt and pepper depending on how salty your stock is

Spray a soup pot with Pam and set on medium heat.  Add the onion to the pot and cook until the onion is wilted about 5 minutes.  Add the cauliflower, potato and the stock.  Cover and bring to a boil and reduce to simmer for about 10 minutes until the cauliflower is soft.  Take the pot off the heat and using an immersion blender puree the soup.  Add the groundnuts.  Taste and correct for salt and pepper.

I know the Psychiatric community is all over PTSD, Post Traumatic Stress Disorder, but I think I have stumbled upon a more positive disorder I call Post Traumatic Cooking Disorder.  I have self-diagnosed this after years of flash backs about food and cooking.

Today while I was buying a head of cauliflower I had a vivid memory of the summer of 1980 I spent living in Nantes, France.  No Nazi’s were involved is my disorder, but I did spend a lot of time that summer walking past bombed out buildings that had sat half demolished for forty years on my way to and from school.

I was living in Nantes with a French family.   Marionique and Patrice were the parents of two little boys ages five and three.  Why they wanted a college girl to live with them I will never know.  I don’t remember much about them, probably because my French was so bad that I had a headache all the time from concentrating on trying to understand them.  I certainly know they hardly ever understood me.

My cauliflower flashback was from my first weekend with them.  I arrived in Nantes after spending a week in Paris with a group of 12 other American students I was going to school with.  We arrived in Nantes by train and were all met at the station by our new families.  Marionque picked me up and after many false starts at conversation I finally understood her to say, ‘I think we are going to have trouble.”

We arrived at her tiny house and after she showed me to my room she told me we were going to get back in the car and go to their summer place on the coast.  I was a little apprehensive because I was going to miss the fun my friends and I had planned for the weekend in Nantes and I was beginning to realize that my personality was dependant on being able to communicate humor, which I could not do in a language I hardly spoke.

I was right to be fearful because the “summer place” was the French equivalent of an airstream parked on a perch overlooking a violent Atlantic ocean.  The only thing I remember Marionque teaching me all summer was how to make a steamed head of cauliflower with ham slices and cheese sauce on top, but it was well worth it.

Once we arrived at their retreat Marionque and I walked into the little village to buy food.  She asked me to go to the meat counter and order “quatre tranches du jambon,” which I came to learn was four slices of ham.  I was certainly not used to ordering meat by the slice, but I have never forgotten that “tranche” means slice in French and I have never used it again in my life.  No wonder the French are thin when they order meat by the slice rather than by the pound.

We walked home with our basket of just enough food for dinner for five people, one cauliflower, four slices of ham, a small hunk of Gruyere like cheese and a small bottle of milk.  Marionque steamed the cauliflower until it was just tender and then draped the thin slices of ham over the top and poured the Mornay sauce she had prepared with the milk and cheese over the top.  I carefully watched her prepare it, helping where I could.

It was probably the most silent meal I had ever eaten but so delicious.  I was incredibly lonely being in the middle of nowhere with a strange family unable to communicate, but the food was so delicious and simple.  Now whenever I see a whole head of cauliflower I have a little tug-of-war internally from remembering my feeling of isolation and the divine taste of dinner at the same time.  I’m sure it is already a real disorder, but for now I will just all it PTCD, short for Post-Traumatic Cooking Disorder.

I love cauliflower, but the rest of my family thinks they do not, so I am always attempting to find ways they might change their minds.  Unfortunately I made the calorie laden cauliflower au gratin once and so that is the high bar mark for a vegetable they would rather not have at all.

Today’s recipe is a much healthier use that also encompasses sweet, tart and salty flavors with a little crunch.

2 T. chopped green herbs – I used chives, Italian parsley and thyme because that is what I had in the garden, but you could use any combo you like

Cover a cookie sheet with foil and spray with pam.  Place the cauliflower in a single layer on the cookie sheet and place in the oven to roast for about 30 minutes it should get a little brown.

Mix everything else except the pecans together in a small bowl and let flavors marry together.

When cauliflower is done.  Place it on a platter and sprinkle the vinegar mixture over it and then the pecans.  Serve.

You can also eat it cold, but save the pecans and put on right before you eat it.