Things I Will Miss About Tanda Tula 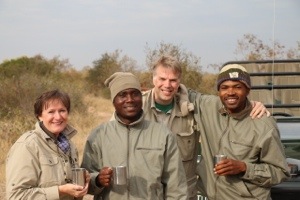 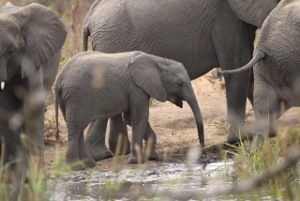 Sadly this is our last day at Tanda Tula in the Timbavati Game Reserve. We have one last game drive this afternoon, a farewell dinner, one last night in out cozy bed kept warm by the electric heating pad in our lovely tent and one last waking by our friend with the tea tray in the morning. This has been a magical place.

Here are just a some of the things I will miss in no particular order:

Being surprised by a troop of elephants coming to drink at the watering hole right in front of the pool while I enjoy an afternoon tea.

Riding up high in the back row of our Land Rover as our game ranger, Foreman pulls off the dirt road to traverse the bush in search of the baby leopard snuggling with her beautiful Mama.

The warmth and generosity of the staff with fantastic names like, Smiling – the barman, Happiness & Pinky- servers, and Scotch a ranger.

Enjoying Chef Ryan’s yummy creations too many times a day, especially the duck, the mushroom tart and all the many salads at lunch everyday.

Taking the morning walk after breakfast with Foreman teaching us about animal tracks and poop and being below eye level of the elephants as they traverse behind us at a safe enough distance.

Meeting so many friendly people from all over the world and sharing the excitement of seeing this beautiful part of the world together.

Sitting at the edge of the outdoor lodge overlooking the dry river bed as a perfect breeze blows sweetly through the trees and I watch the antelope grazing.

Spending so much time with Russ sharing all the magic of being so close to God’s gorgeous creations.

This morning we went on out last game drive at Leopard Hills before setting off for our tented Safari Camp. We had our regular gang and were joined by the Honeymooners, an Italian and half Brit half Brazilian who had just married on Saturday and arrived at camp yesterday afternoon without their luggage.

Our drive was incredible. We set out to find rhino which involved following fresh tracks that circled and crossed and eventually led us into the bush where we found two adults and a three year old. Before we found the rhino we happened upon a fresh kill. Skip to the next paragraph if you can’t handle this section. Yesterday we saw two female lions who had blood on them. Hugo, our guide said that he heard on the radio that the lions had wounded a zebra, but had lost it before they could bring it down. That left the zebra vulnerable to the hyenas it met this morning. When we found them two female hyenas were making short work of their new meal while a young male skulked around trying to get a bite. Hyenas have the most powerful jaws and were incredibly efficient butchers.

This paragraph is about sex so if you are under 18 close your eyes. After the rhino find we tracked a male a male leopard where the female was busy trying to get the male to give her what she wanted. In the leopard world the female has to bug the male into taking care of business. After a few failed amorous attempts the male leopard finally jumped on top gave a half a second push, bit her neck and fell off. Uneventful would be my best description. We learned that the female works at him multiple times to try and have a baby and have no need for him for a few months.

After have our morning coffee in the bush we were back to camp for another fabulous breakfast over looking the Savannah. A quick shower and we had to leave our glamourous oasis for our trip to our new camp.

We moved from the Sabi Sands preserve to the Timbavati. Instead of the Ritz Carlton like accommodations we are staying in a tented camp. that means we have a permanent tent with a real bathroom. We got here just in time for a delicious lunch of salads and fruit and the kind of things I need to eat. We have half an hour before we are out on our first game drive here. I am looking forward to seeing the difference. So far one thing is similar, it is the friendliness of all the South African people we have met. You need to come to this country to see the animals, but you will come back because of the people. 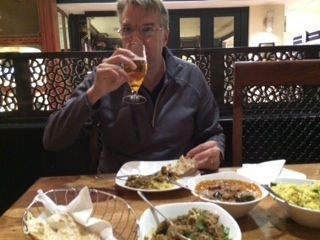 I don’t know what kind of cosmic energy was happening for us, but our Delta flight from Atlanta to Johannesburg was practically delightful. We ate our lunch in Atlanta at One Flew South in the E terminal and it was worthy of being a destination not an airport eatery. After Sushi and an arugula and Brussels sprout salad we boarded our plane.

Thanks to tailwinds our fifteen hour flight was cut down to fourteen hours. Being such a long overnight flight most everyone stayed up watching movies and enjoyed the first of three meal services and then almost in unison our whole cabin went to sleep. No one talked, no one snored, no babies cried, no flight personnel woke us up. I slept through the second meal which was a godsend. After getting about seven hours sleep I woke up to watch two movies, needlepoint and eat a chicken salad and fruit. It was practically like being at home.

Russ and I waltzed through passport control and across the terminal to our hotel for the night. Since it was only five o’clock and at least I had slept, (Russ’ lack of airplane sleep is no different than his lack of sleep any where) we decided to go to Nelson Mandela Square for dinner to see something different.

We showered and got a nice driver named Franz who drove us the 20 minutes to Sandton, a good area on the north side of Joberg. We walked around the shopping and restaurant area and settled on an Indian Restaurant. From Ottawa to London to Bali it never fails that we eat Indian when we are abroad. Somehow it always makes us feel like we are home. We also knew that we were going to be eating South African all week in our camps so it was out last chance for a change of pace. We had a lovely waiter who asked us if we followed soccer. We told him we were sorry that South Africa did not make the cut. He generously assured us that the Americans were going to win. We tried to correct him, but he would hear none of it.

As we walked through the shopping area looking at the beautiful Ardmore pottery of tea pots with leopards or jugs adorned with elephants I started to get really excited about going to Kruger tomorrow to start our week of Safaris to see real animals. Then out of the corner of my eye, I saw a display of Yankee Candles in a store window. Oh God, I thought. I just spent 24 hours going half way around the world to come face to face with what I try and avoid in America. No worries. We will be leaving all this in the AM when we fly into the bush.

As a college student in the early eighties in America my exposure to South Africa was all about apartheid and the pressure on multinational companies doing business in South Africa to end human rights abuses.  It was a very one-sided view of a complicated country and one that brought me no interest in ever going there.

Fast forward to 1996.  Nelson Mandela had won the presidency two years before in the first multiracial elections after he negotiated the end to apartheid.  Things were changing fast in South Africa but the news of the country still left me disinterested in visiting.

Then I was tasked with finding locations to shoot commercials for BT, the British Telephone Company and before I knew it I was on a place from London to Johannesburg.  Although I was sick of hearing about South Africa from the years of news coverage I actually knew practically nothing about the country.

My disinterest was immediately replaced with a love at first sight in my first days in the beautiful country.  The people I met there, both black and white, were incredibly kind, sweet, generous and interesting.  I visited the homes of a tribe of Pedi who wore tartan kilts, game preserves that raised big cats, farms of Afrikaners who raised ostriches, the Kruger Park for safaris as well as the grand palace resort in Sun City.

People would ask me if in America I had heard of what Nelson Mandela was doing in South Africa.  The question was posed to me with different inflections depending on who was doing the asking.  I told them of course I had heard of him.  Clearly things were changing fast in this country.  The surprise I felt most is that all the people I met appeared to be the happiest people on earth.  I don’t know if they were that way before Mandela’s election, but I have to guess they were inclined that way naturally because it was so genuine.

It came as a little bit of a shock to me since I had spent the fifteen previous years being bombarded by media reports of strife and great unhappiness in South Africa.  Of course reality is not always the way things are portrayed in the news, but I definitely got the feeling that much of the good that was happening was due to the work that Nelson Mandela did.

South Africa is still the one place on earth I want to revisit.  The people I met there made me feel welcomed and treasured.  They were excited about the possibility of my shooting commercials in their beautiful country and showing the British that South Africa was so much more than the country that had apartheid.  I am thankful I was able to visit South Africa when Nelson Mandela was President and see what he was doing.  God Bless Nelson Mandela.