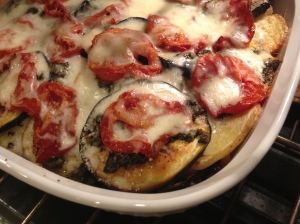 I found two nice Eggplants in my garden today so that’s what’s for dinner tonight.  In our house there is nothing as good as eggplant Parm, but there is also nothing more fattening.  So in a spirit of a healthier version I made up this recipe.  I pre-baked all the vegetables separately so I could coax the best flavor from each. I left out tomatoes sauce because it has too much sugar and I greatly reduced the cheese.  Since I was not frying the eggplant I added a few sliced potatoes for structure and Pesto to get a big flavor.

2/3 cup of mozzarella and Parmesan – any proportions you want

Preheat the oven to 425 degrees.  Line a couple of jellyroll pans with foil and spray with pam.  Put a cooling rack on one pan and layer the eggplant on the rack.  Spray with Pam and place in oven and cook until the eggplant is browned, about 30 minutes.  On another pan layer the tomatoes and spray with Pam, salt and pepper and place them in the oven, cook until the water cooks out of the tomatoes, about 30 minutes.  On a third pan layer the potatoes and spray them with Pam, salt and pepper and place in the oven, cook until lightly browned, about 10 minutes.

Once you have cooked all the parts spray an oblong shallow pan with pam.  Place a layer of half the potatoes down, followed by all the caramelized onions, and half the Pesto.  Place a layer of half the eggplant, and start again with the potatoes, pesto, eggplant and end with the tomatoes.  Sprinkle cheese on top and place the whole thing back in the oven and bake about 20 minutes until the cheese is melted.  Good served hot or at room temp.

Caramelized onions are one of the truly great low calorie foods.  I make big pans of them and then divide them up into smaller portions and freeze them.

They can be used to top a turkey burger that is just a little bland, or put in a sandwich to add some depth of flavor.  Added to tomato soup, even canned, they will make your mouth so happy.

They are easy to make, but still take a little time.  Always cut more onions than you think you will need they cook down to less than ¼ their original volume.

Slice onions.  Spray Pam in a large frying pan and put onions in it.  Place on medium low heat on stove.  Cook low and slow, stirring every so often. After about 20 minutes the onions should start to get golden brown.  Don’t try and get there faster by making the heat higher.  The low and slow develops the onions natural sugar.  When they get to the color in the picture sprinkle a tiny amount of sugar on top and stir.  Continue cooking about 5 more minutes until they get brown.  Putting the sugar on too soon will make them burn.  Salt to taste when done.

Use them on everything.  I love them in salads, mixed in eggs or in a grilled cheese, but that’s not very figure friendly.

Mediterranean Half Cooked Half Raw Salad

YUM!  This is now a new favorite.  I created this salad as a way of using up smaller amounts of vegetables. The creation of half roasted vegetables with their more complex flavors, raw vegetables with their crunch, capers and feta cheese for it’s saltiness and vinegar for the tang makes a really satisfying dish.

Four cups of roasted vegetables – I used Eggplant and zucchini, but you could use carrots, yellow squash, fennel, or even sweet potatoes

Preheat oven to 450 degrees.  Cut the vegetables you are going to roast in uniform sizes about the sixe of a cherry tomato.  Cover a cookie sheet with foil and spray with pam.  Spread the vegetables in a single layer.  Roast in oven until browned and soft about 30 mins.

Remove from oven and let cool.  Mix the vinegar, oil and Splenda together.  Toss the cooled roasted vegetables with the tomatoes, red onion, mint, capers and dressing in a bowl.  Add the feta and toss gently.  Can be served at room temperature or chilled. 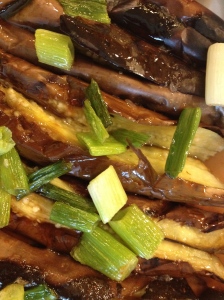 Russ and I went to a fabulous Vietnamese restaurant in Palo Alto called Tamarine.  I had this wonderful eggplant, which I have done my best to recreate and lighten up.  It could not be easier and I think I came somewhat close to my memory of it.  Even if I got it totally wrong, it is still yummy.

8 Japanese eggplants  (They are the long skinny ones.  You can use purple or white)

Cut the stem end off the eggplant and place on a medium high grill.  Cook on one side for five minutes and then flip them over and cook the other side for 3 minutes.

Remove from hear and piece the skins with a fork.  Set on platter.

Mix the limejuice, fish sauce and Siracha together in a small bowl.

Put the canola oil in a small saucepan and heat up on medium high heat.  When it is very hot put the scallions in the oil and stir them around, cooking for 2 minutes.

Slit the eggplant down the center and spoon the fish sauce mixture and the green onions with a little of the  oil over them.  Serve hot or cold.  I think they are better after they have sat and had the flavors married together for a while.

Ratatouille – Not Like The Movie – but served in an omlette 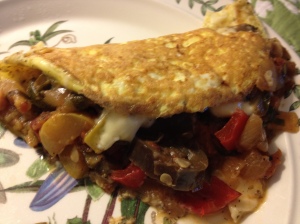 When I was in college I lived off campus for two years with three roommates.  We each had responsibility to cook dinner for the house Monday through Thursday whether you were going to be eating there or not.  One of our roommates, Annie, was a vegetarian, so I was always searching for good ideas of what to make that we all would like as well as something that was inexpensive.

Ratatouille was a go to dish, but back then I made it with a ton of olive oil and served it covered in cheese.  It was vegetarian, but certainly was not healthy.  Since then I have discovered that both the oil and cheese were unnecessary to make a great dish.

Here is my much lighter version, which I used as the filling for an omelet.

1 15 oz. can chopped tomatoes (I have mentioned in previous recipes that fresh tomatoes are wasted on these cooked dishes, but if you are overwhelmed with fresh tomatoes go ahead and use them.)