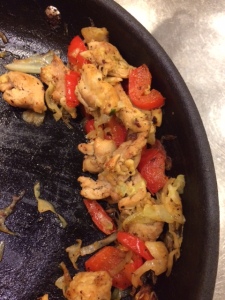 Breakfast in South Africa was probably my favorite meals. I’m not sure if it was because I was eating more than my normal cereal and fruit so the excitement my taste buds were getting was making me giddy, or if it was that we ate breakfast at ten in the morning after having spent three and a half hours out looking at beautiful animals. Whatever the reason I had some really tasty stuff in the mornings. The only sad thing is that none of the offerings were repeated. Yes, it was good to try new things, but if I really liked something I did not have an opportunity to try it again and figure out how to recreate it stateside.

One item I really liked was an unusual dish for breakfast, chicken and cabbage. Although red peppers were not in the name they played a major role in the dish. Last night I tried to recreate it for dinner and even if I missed some ingredients Russ and I ended up liking what I made. It is incredibly simple and fast and healthy.

Lots of salt and Pepper

Serve with rice if you want a starch. 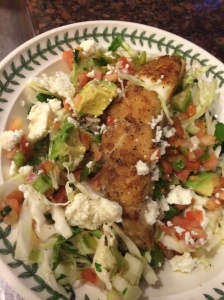 Perhaps the longest recipe title so far, but it explains it all. I gained two and a half pounds on vacation and lost half of it on my first full day back. Getting right back on the wagon is the only way to do it. I have to break myself of sugar craving since desserts are my downfall and I certainly ate plenty of yummy treats while I was away.

One strategy is that I bought many kinds of fruits right when I got home, cherries, cantaloupe, mangos, raspberries and blue berries to help wean me off processed sugar with natural sugar. I have to be carful not too eat too much fruit since it too has calories, but it does a good job to make me forget cakes, tarts, cookies and puddings.

The other strategy is to eat filling, crunchy, full flavored foods. This salad satisfies all those things and Russ likes it as well. – This will make four servings

Half a head of green cabbage- shredded

Mix all these things together and set aside. This will be the base of your “Taco Salad”

Four 4 oz. pieces of codfish or any other white fish

Mix a ¼ cup of Wondra in a small bag with lots of salt and pepper. Put the pieces of fish in the bag one at a time and shake it around until the fish is coated.

Heat a non-stick fry pan on high and spray with Pam. Add the fish to the pan and cook on one side for two minutes until browned. Spray the top of the fish with Pam and flip it over cooking it another two minutes. If you are using Cod and it is a thick piece of fish turn the fish a quarter turn and brown the sides for about 30 seconds each side.

Toppings for the Salad

Put the cabbage mixture on a plate, lay a piece of fish on top and sprinkle with avocado, salsa and cheese. 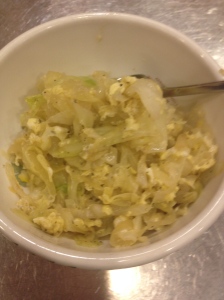 In the spirit of the Olympics and wanting to use up a cabbage that was in my veg drawer I made up this three-ingredient dish that is reminiscent of Russian peasant food.  It does not look or sound as appetizing as it tastes, but on a cold dark snowy night it will keep you warm and satisfied.

Spray a large skillet with Pam and place the cabbage and the onions in it on a medium heat.  Cook, turning the vegetables often for about ten minutes, until they are wilted and the cabbage is not giving out any more liquid.  Salt and pepper the vegetables.  Pour the eggs into the pan with the veg and stir until the eggs are lightly cooked, about one minute.  Taste for seasoning, more pepper is better. 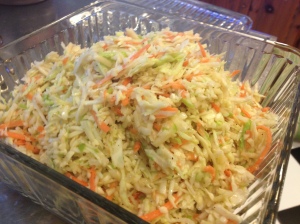 When I was younger I used to think of Cole Slaw as a mayo laden summer side to eat with fish.  With age has come the realization that I love slaw of all kinds with lots of dishes from Italian pork roast to Chinese chicken wings.  It is really a great cold weather food because cabbage is available in winter.  This slaw uses just a touch of mayonnaise cutting down on the amount of fat dramatically.  Using a food processor with the grating blade makes quick work of cutting the vegetables.

2 small apples – grated with the skin on

Toss the vegetables together.  Mix the dressing up and pour over the grated vegetables.

Thai Slaw with Chicken and Peanuts 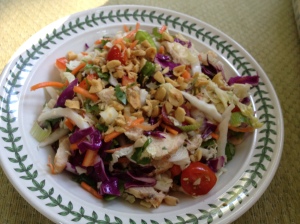 This is a really crunchy, satisfying summer salad.  I like to add the dressing right before serving so it does not get soggy.

3 half chicken breasts- grilled and shredded

Mix all the veggies together.

Put all the dressing ingredients in a jar and shake up.

Add the chicken to the veggies and toss together with the dressing.  Only pour about half the dressing on at once and see if you need more after tossing.

Put in individual bowls and sprinkle with a tablespoon of peanut on each bowl.

You can get at least 6 dinner size servings out of this.

You can use other vegetables, like diced cucumber, avocado, hot peppers, zucchini, green cabbage, Savoy cabbage, whatever you like.