It’s 88 degrees, but it feels like 99. The music blares to a late eighties gay bar beat and it’s three in the afternoon. The ocean pounds the white shore next to us. I need a nap.

Since it is the first real cold day in Durham you might think I am dreaming, but I am sitting at a bar in St. Thomas waiting for our room. Russ and I woke up at 3:55 just because we were fearful of over sleeping the only flight between RDU and here today. Russ’ cousin Jon is getting married this weekend and we are here to represent Russ’ side of the family.

Jon is a popular relative in our family. He’s a NYC ad guy which means all things cool to Carter. One of his accounts is “Got Milk?” and he often sends Carter autographed pictures of the teen stars who wear the milk mustache. Because of Carter’s adoration she was also invited to the wedding.

Proof that the world is a really small place is the fact that Jon is marrying me junior. His wife to be Aly’s first job was my very same first job out of college. Not just the same job, but the same company, the same territory, the same customers, the same boss just twenty years apart. Suffice it to say we think that Lange men do well marrying ex-Opex women so this is sure to be a happy union.

Tonight we are meeting up with other Lange cousins for dinner. I am hoping that we get in our room soon so I can nap and shower. It’s weird to come to hot weather when I was just beginning to crave some crisp fall air. I am really hoping our room is not too close to this bar because listening to the pulsing beat of the music day and night will make me feel like I’m back to selling OPEX mail opening and extracting machines by day and dancing at Rehobeth beach with my friends at night. I’m too old for both of those things. 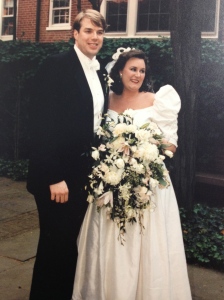 It was a sunny Saturday in Washington, DC twenty-one years ago today when Russ took the crazy step to marry me.  I knew I was more than lucky to have recognized what a kind, smart, generous and funny guy he was, but mostly that he was willing to go out on a big limb and commit himself to life with me.  We had no idea then where we would go, but we knew we would be going together.

We devoted to each other, just as ourselves.  When the minster asked Russ if he would take me as his wife he answered in his quiet, steadfast way, “I will” and maybe our families in the front row could hear him.  When it was my turn to answer the same question, the Georgetown tourists walking outside the church probably could hear my “I WILL”.  Despite the obvious differences in our demeanors and volume, underneath something about our makeup works well together.

Certainly there were kinks to be worked out.  When I first met Russ he only owned three shirts he wore to work.  That meant that he was wearing one shirt, washing one shirt and drying one shirt at all times.  To top it off Russ only ironed the collar, cuffs and just enough of the center button plackets that showed with a suit coat on.  I only realized this when, one day, he took his jacket off and inadvertently revealed the wrinkles on the majority of his shirt.

The shirt rotation seriously ate into available time to be together. So for Russ’ first birthday after we got engaged I bought him ten new shirts and introduced him to the Chinese Laundry down the street from his house.  That one act profoundly changed his life.  Last month Russ was cleaning out his closet and held up one of the original shirts from that birthday and asked me what he should do with the now sleeve-ripped-collar-worn green striped shirt.  Sadly, I told him he needed to throw it away.  “I love this shirt, “ he said with a sigh.

It took me a little longer to recognize that Russ is almost always right when it comes to remembering things.  This is hard for person like me with the “Not always correct, but never in doubt” personality.  Once I finally came to accept his wisdom trumps mine things have been much easier.  It was never really very hard because Russ has the “I know I’m right, but I don’t have to tell you” personality.  I can only imagine that Job also had that same trait.

Not all things in life are as easy to solve as the shirt problem, but we rarely do much without laughter and I think that is the key to twenty-one pretty wonderful years.  Today, on this anniversary I want to publicly tell the world that I have the best husband, for me.  Russ, thank you for all that you are, all that you do and all that you are going to do.  I think there is a load of laundry in the dryer that needs to come upstairs, please.

I am hung over.  I’m not talking about the way one feels from enjoying too much bubbly or one too many Bloody Marys, just the bone weary way I feel from packing as much fun as possible into a wedding weekend.

My Georgia native friend Michelle wed her great British love Richard is what was hands down the most spectacular, sweet, surprise filled wedding ever.  Ninety friends and family came from all over the world to eat, drink and be merry as if they were representing their countries in some wedding Olympics.

After all that you might understand my excitement when we passed a hand painted sign on the side of the road near Bennettsville, South Carolina that read, “Used Body Parts Ahead.”

For more than a moment I thought that I could trade-in my dog-tired feet for a fresher, even if used, pair.  Kind of like buying a retread.  It took me more than a minute to realize the sign was for auto body parts.  They should have said that.  Please tell me I’m not the only one who ever made that mistake.

Whatever damage I did to my diet from eating or body from dancing it was all worth it to witness the joining together and celebrating the love of two fabulous people.

Growing Up and Liking It

As if Russ and I have not had enough great travel already this year, today we are enjoying the best place we have been in a long time, the Inn at Palmetto Bluff.  As I write this I am sitting in an Adirondack chair under the shade of a three hundred year old live oak tree draped in Spanish moss, overlooking the wide expanse of the May river and it’s tidal marsh.

We are here as guests of our great friends Michelle and Richard who are getting married tonight in the darling waterside chapel, an occasion of great celebration.  After yesterday afternoon’s croquet and bocce tournaments and Cajun dance dinner party complete with moan inducing oysters it is hard to imagine how it can get any better, but I am sure it will exceed my wildest imagination for the perfect wedding.

Breakfast this morning was at a place called Buffalo’s where you had your choice of the biscuit bar or other even more fattening items made to order.  When one of the categories of offerings is “Sticky” you know I  had a hard time finding something low calorie to eat.  Russ had the best grits on earth, which I can verify because I had a one orgasmic bite.

Between breakfast and my upcoming massage Russ, my friend Hannah and I rode our cottage assigned one-speed bikes through a good portion of the 20,000-acre property.  Thank goodness for this exercise to help counteract the intake portions of the day.

As we peddled the winding paths through the forest, me in my white linen shirt, hiked-up so as not to catch in the chain, I had a strong flash back to a movie I saw in fourth grade called “Growing Up and Liking it.”

One day, late in the school year the boys were taken from our classroom and sent to another room while the girls remained in our classroom with all the blinds drawn.  Our teacher, Miss Stoelting, turned on the projector to a movie that opened with a girl, much older than our 9 year-old selves, maybe she was 12, riding a one-speed bike in the dappled sunlight wearing a cute white culottes.

The music played and the male announcer started talking about how girls grow up and change… the movie, made by the Kotex company, was all about getting your period.  As fourth graders, we were horrified.  It was all news to us.  We were a test class to see if fourth graders needed to know this information.  We did not.

A soon as the movie was over we all ran to the girl’s room, filling every stall.  I remember pulling my underpants down to see if I was bleeding and calling out to my friends to see if theirs had started, sure that it was eminent because that was why they had showed us the movie.

I so badly wanted to know if the boys really saw a movie about cars, but never had the nerve to ask them.  If you happen to be one of those boys please call and let me know.

Once the shock about the growing-up part subsided my big take away from that movie was that you could still ride your bike when you have your period.  I still laugh about the 1960’s propaganda title, and the fact that the narrator was a man.

During those adolescent years there was no liking growing up.  You just wanted to be grown up. But man, today enjoying another great rite-of-passage, a wedding, I am so glad that I am a grown up and can still ride a bike whenever I want.