Kristin Hiemstra of The Art of the Potential radio show has created a TV show called Rock Your Life.  She and her camera guy came and spent the better part of the day filming me for her show.  Part of the filming was interviewing my while I created a new recipe.  Since the first of my yellow squash was coming in I made up this side dish.  Kristin is still in the throws of selling this show so if it airs somewhere I will let you know.  Until then, just follow the recipe here.  It was really quite tasty. 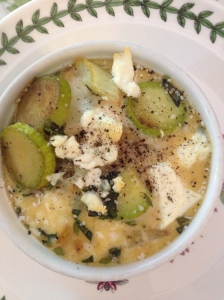 Preheat the oven to 350º.  Heat a non-stick skillet on medium high heat and spray with Pam.  Sauté the squash, fennel, salt and pepper for about five minutes until lightly browned and soft.  Set aside to cool slightly.  In a large bowl add eggs, condensed milk and whisk together.  Add herbs, Spelnda and the cooled vegetables and a little more salt and pepper and fold.  Spray Pam in individual ramekins and using a ladle fill each one with the mixture.  Dot the top of each ramekin with a little goat cheese.

Put the ramekins in an oblong baking pan and place in the oven.  Pour enough hot water into the baking pan to come up at least half way of the sides of the ramekins.  Bake for 25 minutes.  Makes six servings. 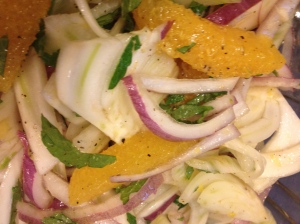 This is a good winter salad that can be made with either oranges or grapefruits.  You only want to use the best part of the citrus so cut the peel off and cut section into sections called supremes which leaving out the skin of the sections.  Then squeeze the juice out of the leftover skin part of the fruit.  If you want you can also add arugula.  Just have fun

Juice squeezed from the leftover parts of the fruit

Toss everything together and enjoy. 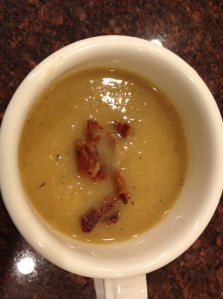 The other night our great friend Megan Ketch took Carter and I out to dinner.  It was such a treat and we shared a fennel and bacon soup.  I have no idea what they put in theirs beyond the titled ingredients, but I made up one of my own without any diary.  It easily can become a vegan recipe by using olive oil in place of the bacon.  But unless you have a religious reason have the bacon, it is such a small amount, but it really makes it.

Cut the bacon into lardoons, by stacking up all the slices and cutting them into half inch pieces.  Place all the raw bacon in a soup pot and cook on medium high heat until brown and crispy.  Make sure you are stirring it towards the end.  Remove the crispy bacon from the pot and set aside, leaving the fat in the bottom of the pan.

Turn heat back up to high and add the onions, carrots, celery and fennel.  Cook for about 5 minutes stirring often.  Add half the salt, fennel seeds, thyme and the garlic and continue cooking another 5 minutes.  Add the chicken stock, potato and the Bay leaves.  Cover the pot and bring to a boil then reduce to simmer and cook for 30 minutes.  Remove from heat.

Using an immersion blender puree the soup.  Add the sugar and a bunch of black pepper.  Taste for salt, it will need more.

Serve and sprinkle a spoonful of the bacon on top. 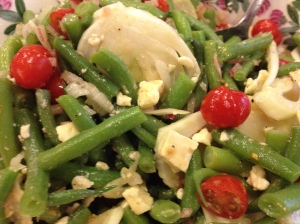 Blanch the green beans for 3 mins. and then remove them quickly and put them in a bowl of ice water t stop the cooking.  Add the tomatoes and fennel.

Put all the dressing ingredients in a jar and shake up to mix.  Pour over the vegetables right before serving.  Sprinkle the feta on top.

Don’t put the dressing on too early because it will make the beans an ugly olive green rather than the bright green, but if you have leftovers it will keep fine, just not be as pretty.