The Benefits and the Curse of a Well Trained Nose

Today as I was outside walking Shay in her normal sniff, sniff, sniff “don’t pull me along mommy I’m smelling everything” walk I just closed my eyes and took a big whiff too.  I could really smell the summer.  The overwhelming scents of honeysuckle with undertones of magnolia were the first scents that hit me.  Once of the best things about living in North Carolina is smell.  As we walked past our vegetable garden the basil and mint competed with the flowers.  Then I drew in the very distinct odor of the tomato plants.

Shay all along was concentrating on the ground smells of deer that had certainly passed through the property the night before.  I wanted to teach her to enjoy the beautiful scents and not just those of other animals so I dragged my hand among the sage leaves and held it to her nose.  She pretended to be interested in it for just a moment and then pushed her face deeper into my hand for a good petting.

From the sage I moved to the lemon thyme and then gave Shay another whiff.  This prompted her to go right over to the low growing herb and sniff around.  I realized she thought it might be a good place to leave her own scent so we quickly moved onto the grass.

As we walked in the yard the freshly cutgrass mixed with the clover top notes to make a familiar bouquet. I stopped and closed my eyes and sucked in the air hard, holding it in my throat like my yoga instructor has taught me to do.  For a moment I felt as I could smell the fireflies and the dust on the gravel driveway.  With my eyes closed I felt a tingle and the smell changed to something more pungent for just a second, then just as I opened my eyes to see if perhaps another animal was crossing our path I saw a flash of lightening and a few seconds later heard the confirmation of thunder.  I think I actually smelled the lightening coming.

Paying attention to smells has served me well in the cooking part of my life.  I’ve always been good at deciphering what ingredients are in a dish someone else has made because of my detective like nose.  I also have not done things that dull my sense of smell, which can naturally diminish with age and abuse.

The only problem with a well-trained olfactory machine is that if I smell something tasty it starts my salivary glands going and makes my brain think I need to not just smell something good, but taste it as well.  So for now I am going to spend as much time as possible with the flowers outside.  I have never developed a taste for rosewater and the lavender is supposed to make you feel relaxed.  So to combat any hunger pangs I might get I’m just going to go outside and stick my head in the gardenia bush that grows above my lavender and stay then until the feeling passes.   Feel free to come and take a smelling tour of my garden anytime your diets needs it, but I suggest you stay away from the sage which may prompt you to go in search of an entire Thanksgiving meal.

This is a good winter salad that can be made with either oranges or grapefruits.  You only want to use the best part of the citrus so cut the peel off and cut section into sections called supremes which leaving out the skin of the sections.  Then squeeze the juice out of the leftover skin part of the fruit.  If you want you can also add arugula.  Just have fun

Juice squeezed from the leftover parts of the fruit

Toss everything together and enjoy. 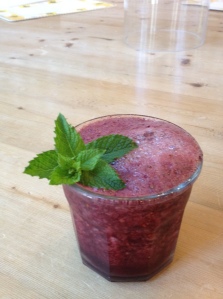 All my life I have always equated blackberries with summer in North Carolina.  Growing up in Connecticut we did not have indigenous blackberries.  But when we went to visit my paternal Grandparents at Hom-a-gen Farm, in Providence NC we had an over abundance of the sweet berries that grew wild in a huge thicket down the hill from a cow barn.

My grandmother, Granettes, loved blackberries and my Granddad loved anything free so I was often conscripted into climbing between the prickly brambles to pick the juicy ripe berries.

Granettes was a very good cook from whom I learned many tricks in the kitchen.  She was not great at giving me recipes, but would describe at length how biscuit dough should feel between your fingers or how to tell that caramel icing for the 1-2-3-5 cake had been cooked the right amount without ever using a thermometer.

Blackberry cobbler was a huge favorite, especially with the Yankee Grandchildren because first it was a dessert, something we did not get often and second the blackberries were so fresh, those few we brought back in the bucket and not in our stomachs.

I will never forget the earful Granettes gave Granddad when a farm worker accidentally wiped out the whole blackberry patch with a bush hog.  It was a sad summer without blackberries.

Yesterday, when I was writing about Friendly’s, a drink I used to get there in the summer came back to mind.  It was a watermelon cooler.  I think that at Friendly’s it was merely watermelon sherbet and soda water run together in the milkshake machine.

Since cobbler is not on my approved list of helpful weight-loss foods and I was thinking about that watermelon cooler I made up a yummy black berry drink.

Put everything in a container that you can put a stick blender in, or in a blender and add about 1/3 of the club soda.  Whirl up until the ice is crushed and the black berries are gone.  Pour in a big glass and add the rest of the club soda.  Tastes like summer to me. 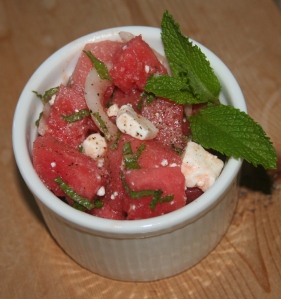 It’s watermelon season so If you missed the June issue of Durham Magazine, here is my recipe from that issue.

Mix together gently and enjoy!