I Am Officially Old

I am the oldest sister. I have two younger sisters who are three and a half and eight and a half years younger than I am. Those halves are very important in sister years. Having a sister who is so much younger than me kept me connected to things that younger people were into when I was past that stage of my life.

For example, Sesame Street premiered the year my baby sister Janet was born. Since I was almost nine when it started it was something I totally would have missed if I did not have a baby in the house when it came out.

For the longest time having such a younger sibling made me feel younger than I actually am because she would share with me what things were going on in her life. Today happens to be her birthday. I texted her first thing in the morning to wish her a happy day and year, she texted me right back and said, “Thanks, 45 it’s a big year.”

Holy S%$&. My baby sister is 45 today. How did that happen? If she is forty-five, that makes me actually old. I think back to my childhood and I can remember my Dad throwing a big party for my Mom when she was forty. I remember it so well because I was in boarding school and got to come home for the weekend to celebrate. To think that Janet is now five years older than my Mom was when I was in high school blows my mind.

The funny thing about getting older is that I don’t really feel like I am old, and I certainly think of Janet as really young, which she is. She is the coolest 45 year old I know. She works harder than anyone else I know, except maybe my husband. She takes the best trips of anyone I know. She has a fabulous girl friend, Sophie. And she is a great sister, daughter and Aunt.

But hey, Sista J, start lying about your age. As long as you are young that helps me deceive myself that I am young too. You came into this world in 1969, really the coolest year of the last decade and you have stayed true to your year. Thanks for being a great sister and I hope that this is your best year yet. You’ve had some good ones so the competition is high.

My sister Janet drove down to Durham today to celebrate my father’s 75th birthday with us.  My Dad just wanted to have a lunch outdoors so we went to the Washington Duke Inn.  We went late enough that the rain had stopped so we were the only people on the terrace.  There may have only been six of us, but we are loud enough to be a party of 20 so it was nice to have the place to ourselves.   Who knows if we disturbed any golfers on far off holes, but luckily no one complained.  My mother has spent her life being embarrassed about how loud we are, but now that she can hardly hear I think she appreciates the volume.

As is always the case when any two or more Carter’s get together we told stories of our childhoods, family trips and traumas or perceived traumas.  I love to hear everyone’s different recollections of the same story or the true confessions about things that happened long ago.

Janet, being the youngest of the children by almost nine years, always had a lot of experiences that somehow slipped under the table.  Today, she recounted how at age 9 she fell off a ladder onto a Danish friend and broke the girl’s leg.  In normal Carter fashion my mother came out and told the girl that she was fine and just to get up and walk.

My mother, having no recollection of either this girl, or the leg-breaking incident said to Janet, “Was this girl living with us?”  It was not such a far-fetched question since my parents always seemed to be the shelter for our wayward friends.   I can remember more than a few holidays when we had a friend of Margaret or Janet’s living at our house with no apparent plan of ever returning to her own family.

In fact we talked about a girl today who lived with my parents more than a month after Janet had moved away from home.  My mother did remember eventually calling Janet to ask her how she might get her friend to leave my parent’s house.

All these true confessions prompted Carter to remind us of a friend she had made once in St. Croix who had broken her arm.  Carter said she had fallen on that girl and that was how she broke her arm.  Why that child never told on Carter I will never know, but she must have been complicit in the accident to keep that fact quiet.

There is not much of a point to these rambling except as a warning to keep your distance from anyone of us in case we might fall on you and break something. 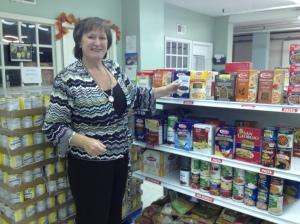 Today was my filming day for the Food Bank.  First I had to appear on live TV for about 30 seconds.  I did not know what I was going to be asked, but lucky for me I only had to think a moment about the answer.  My second filming was for a video for the Food Bank and it was shot at the Durham Branch.  It was much harder because I did not have a script but I had to talk much longer about how people can help the Food Bank.  It took about 15 takes to get right.

While setting of the video shot by putting cans of food on store shelves I had a major flashback to my childhood.  We lived in a fairly isolated house with no girls living nearby so my sisters and I would play together even though there was nine years difference in our ages.  One of the games we loved to play was “Store.”  I had a bedroom with lots of shelves and we would price everything already on the shelves, like little glass animals and piggy banks and then go and take canned food from the kitchen that already had price stickers on it and add that to the shelves.

We would spend hours making fake money some of which went into a box made into a cash register and the rest divided between the shoppers.  I was usually the storekeeper because first it was my room, therefore my store, and second I could add the purchases faster than Margaret and certainly than Janet who was probably only 3 years old.  The only problem with store is that the setting up was fun, but neither of my sisters ever wanted to put anything away when they got bored with shopping.

Another favorite pastime was playing restaurant.  In my same bedroom I had a board that spanned one side of my room, which we used as a counter.  I had a bunch of flatware that my Godmother had been giving me for birthdays and Christmases so restaurant seemed like the only game a kid could play with forks and spoons.  Just like playing store the set-up was the majority of the game.  We would spend hours writing menus and then we would have to find costumes to wear as the waitress or the patrons.

Store and Restaurant were the games I would choose, but Margaret liked to play beauty parlor.  This was my least favorite game to play because she always got to be the beautician and she also had a short attention span.  That meant that she would set a chair up at our bathroom sink and I would have to put my head backwards into the bowl and she would pour a handful for shampoo in my hair and run the water on cold for a minute and lather me up, get bored and walk away leaving me fully clothed with a big wet head full of bubbles and no way to get up without soaking myself.  Sometimes it was even worse than that because she also had my hands soaking in a whole cereal bowl full of Palmolive dish soap.  We had no idea what a manicure was, but we knew that Madge the manicurist told her customers “they were soaking in it” so that’s what we did.  No wonder years later when Margaret was in boarding school with 5 other Margaret’s in her class she took on the nick name Madge.   Was life simpler then?