The other day I heard a news bulletin that the turkey producer Butterball put out saying that there was a serious shortage of big fresh turkeys this year. When Butterball says big they are talking about the ever popular 20 pound plus birds that are capable of feeding all the family around the dining room table and the ones at the kids table too.

This shortage was apparently not due to poor planning on the turkey producers part, but on some strange dieting affliction the turkeys took on, perhaps in the hopes of saving their lives. That’s right, anorexia has come to the poultry house. Turkeys whose only job it was to eat and get fat found something else to do.

Maybe one enterprising bird developed Zumba for T-birds and had the whole rafter of turkeys (that’s what a group of domesticated turkeys are called) dancing the pounds away. I think that good farmers do play music in their poultry houses just to keep birds happy because we all know that happy birds taste better. Perhaps there was a little to much hip hop wafting through the rafters and got the birds to dancing rather than eating.

I doubt that turkeys had figured out that the fat birds all disappeared when they got to a certain size so if they just stayed skinny they could save themselves to live another day. Whatever the reason, turkeys have learned to diet.

The good news from Butterball was that they had plenty of giant frozen birds available. Perhaps this “news” story was all a ploy to get rid of frozen turkey inventory. Butterball was giving the turkey buying public enough notice that they could have time to buy a frozen bird and thaw it in time for Thanksgiving. For me it is not the timing issue, but do I have enough room in my freezer or refrigerator just to hold said giant bird. I need more notice to find a way to get rid of all the food already in the freezer.

Whatever the reason for the big turkey shortage I would like to get to the bottom of how turkey’s have turned into successful dieters so I could incorporate their weightloss plan for myself. I am always looking for ways to change up my program and get those last pounds off. I guess I just need to go in search of those newly svelte birds. It seems like People, oh I mean, Poultry Magazine could do a cover story on this. Nothing sells magazines like a great before and after picture.

If you were planning on getting a big fresh turkey at the last minute let this be your warning, you might have to settle for two skinny birds. Let’s pray that breast reductions are not what’s next in turkey fashion.

Today Carter and I were shopping and as she was trying on shoes “White Christmas” came on over the store’s Muzak system.  Carter went into full on revolt.  “Why are they playing that already?” she demanded.  “It isn’t even close to Thanksgiving yet.”

But it is.  Less than three weeks to Thanksgiving and it is a late Turkey Holiday this year falling on the twenty-eighth.

I was less disturbed by the Christmas music since I am a major Christmas lover.  I was much more confused by the follow-up song of “Afternoon Delight.”  I wondered what drugs that music programmer was on since I don’t find shopping delightful and it was not even afternoon.

To help calm Carter’s mood over the obvious Christmas push put on by all things retail I asked her what foods she wanted to have for Thanksgiving while we were at lunch.  Discussing future meals while enjoying a current one is a favorite topic in our family.  It is one that drives my mother crazy.

Carter started to list all the fattening southern foods my father is famous for making on Thanksgiving; stuffing, mashed potatoes, creamed spinach, creamed onions.  Carter then jumped to my pecan pie.  I asked her if she wanted ice cream or whipped cream and she replied the only answer a Carter of any kind might give, “Both of course.”

My mouth was salivating thinking about the normally forbidden foods that show up at Thanksgiving.  It is normally about this week of the year that I start to crave a really good turkey sandwich.  Not that thin cut deli turkey, which my father hates because he says it’s slimy, but a slab of home roasted turkey with a big scoop of homemade cranberry sauce and mayonnaise on old fashioned southern white bread like Mrs. Dingle used to make at the Tip Top Inn on Pawley’s Island back in the seventies.

The worst part about craving turkey is that the real Thanksgiving bird has a hard time living up to the hype my mind has built up.  I would be much better off if I would just go on and cook a turkey now and enjoy a little two weeks before the real deal so that I don’t create such huge expectations.  Turkey, unto itself is a fairly healthy food, but not the accompanying items on the big day.

So now I’ve done it.  Got my mouth in a turkey way with Salmon on the menu for dinner.  Nothing is going to make me happy until I take care of this desire.  I guess I know what tomorrows “afternoon delight” is going to be. 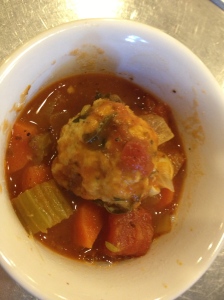 It helps when everyone in the family is interested in eating something healthy.  I bought a spaghetti squash and thought that others might eat it if they had a great sauce to put on it.

Make a poaching liquid for the meatballs

Put the onions, carrots, celery and garlic in a stockpot and cook on medium high for about 5 five minutes.  Add everything else and bring to a boil and reduce to simmer.

While the pot is coming up to boil make the meatballs

Mix together gently and form into ball about the size of golf balls.  Add carefully to poaching liquid just at a simmer.  Pour one jar of tomato sauce over the top of meatballs.  Cover the pot with a lid and simmer for 30 minutes.  With a slotted spoon remove the meatballs and increase the heat to high and boil the sauce adding the tomato paste and Splenda.  Reduce the sauce by about half.