Another favorite holiday rite has come and gone, my garden club Christmas Auction. As an odd number year I did not host it at my house, but I still had my regular job as auctioneer. This year I had two elf Helpers, Stephanie Perun and Kathi Eason. They did an excellent job keeping the items coming and “Carol Merriling” them around the room so people could get a closer look at the yummy rum cake or beautiful wreath that someone had made.

It was a banner year for the auction. People out did themselves with the items they brought. We had ten very generous guests who bid wildly along with the members and our best treasurer Missy McLoud, she told me the total was over $6,000 which is about a thirty percent increase over our best year. That’s a lot of money for cake!

One reason we were so profitable this year is when an item was going really high the donor often volunteered to make a second one so I could sell two for the crazy high price. So thanks to those people who “doubled” their donation. The prize might go to Nancy McGuffin, who was a guest, not even a member of the club. When Pokey Schiff’s item of a needlepoint canvas of the garden club logo went for $150, Nancy volunteered to donate another 3 canvases so Pokey’s original donation got quadrupled and four people went away with the prizes and the Garden Club made $600. Sha-swing! 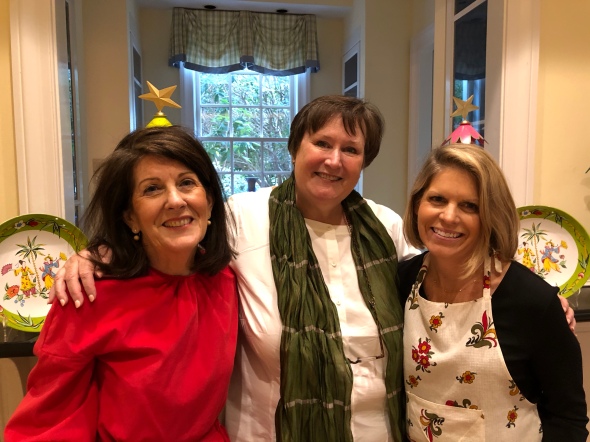 After all the biding was done we all retired to a lovely lunch thanks to our hostesses and Chef Paris! Thanks to the elves who worked so hard in the kitchen, Mary Lloyd, Laurie and Elisabeth. At lunch I finally got to sit down and rest my voice. It was worth stressing it for $6,000! I couldn’t have done it with out my elves, Stephanie and Kathi who both modeled that darling purse that Karen Rabenau made so well! Thanks to all who made this year the biggest success ever.