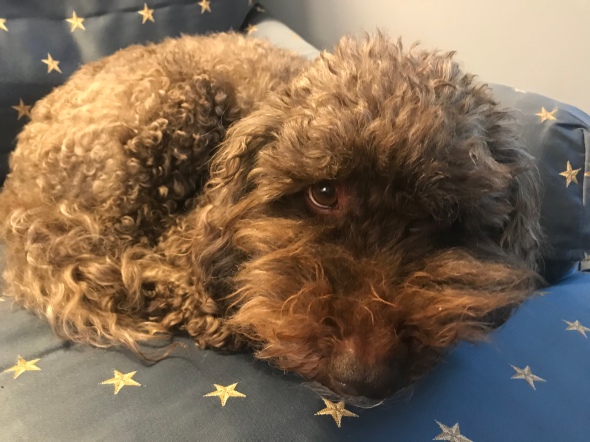 Sometimes I wonder if Shay needs me at all. I had a busy day out of the house. First I went to meet a woman for coffee who is networking to find work in the non-profit area. Then I went to vote and met up with friends at the polls.

From there I went to lunch with my friends a Christy and Angie. It had been so long since I had seen Angie. Her daughter Liz played basketball with Carter and graduated a year ahead of Carter. She went on to be a walk-on at Carolina and has continued to be a superior person. I spent so many years sitting in the bleachers with Angie and her family who are the most supportive people. They used to cheer as loud for Carter when she made one basket as they did for Liz when she made twenty baskets in the same time period. It was wonderful to catch up with her.

From lunch I went to needlepoint where I spent time at the stitchers table with my friends I have seen so little of due to my absence. Tomorrow is Nancy McGuffin’s birthday and I was glad to get to spend time with her in pre-birthday celebration.

On my way home I called my Dad to discover he was trying to get his computers fixed. He told me he had been on the phone with Apple for more than a week without any remedy. He told one of the Apple people on the phone he was going to take three computers and one iPhone and throw them in his lake and the tech’s response was, “Don’t do that, it might kill the fish.” My dad thought the tech didn’t have the right concern for his not working equipment.

I finally got home after four. Shay did not bother to come greet me. She remained on my bed upstairs. I got to work prepping food for Mah Jongg lunch tomorrow. That was when I realized I was short one ingredient. I left the house to go back to the grocery and came home. It had been over seven hours since I had seen Shay and she had gone out. I went up to my room and she jumped up and greeted me. When I suggested she come down stairs and go out she just looked at me. Once I said the word dinner she changed her mind. I guess she does need me, but not without prompting.