← Dana’s Childhood STUFF
Half and Half Day →

This morning my neighbor texted me that a big box had been delivered to her house yesterday by mistake so she left it on my front porch this morning. I went to retrieve the unexpected package from the outdoor table. It was addressed to Russ from his father.

I asked Russ if he was expecting a box from his father. Apparently Russ had been holding out on me that his father was cleaning things out in his house and was paying good money to send this stuff to Russ. 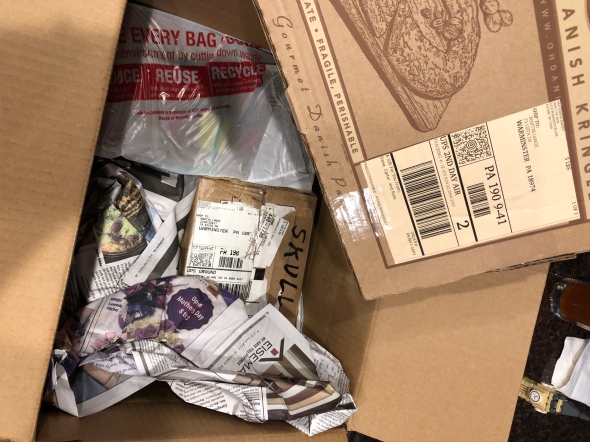 Tonight I opened the very skillfully and precisely pack box. You might have thought that the items were hand blown glass of great value. The first thing I opened was a separate box with a string art boat wrapped first in acid free tissue then newspaper for padding. Russ thought he might have made it one weekend in the Poconos when it probably was bad weather.

Then I opened another box marked “SKULL”. It was a skull from Walt Disney World still with the $4.99 price tag on it. Just the memento you want from a fun family trip. 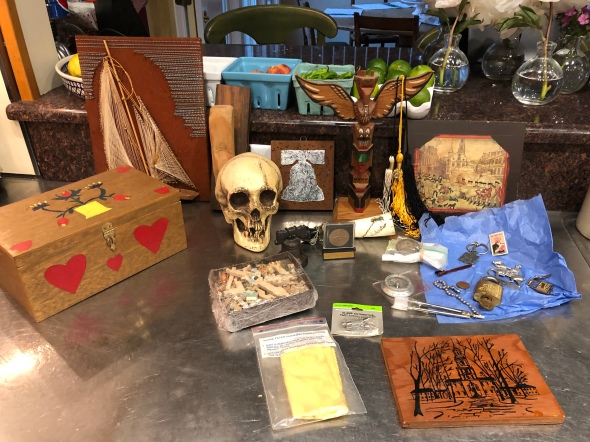 There were boxes inside boxes with trash and trinkets, a small unopened package of archer fuses, a penny, an unused .20¢ stamp, a compass, two locks, Two liberty bells, one Russ made out of wood and foil, the others cast metal replica. Russ’ Dad was cleaning out his house, just to make Russ decide what to do with these “treasurers.” Now they sit on the kitchen counter. I am not sure how long that will last.