← Life of the Party
I’m Addicted to James →

To the Rivha, For a Party 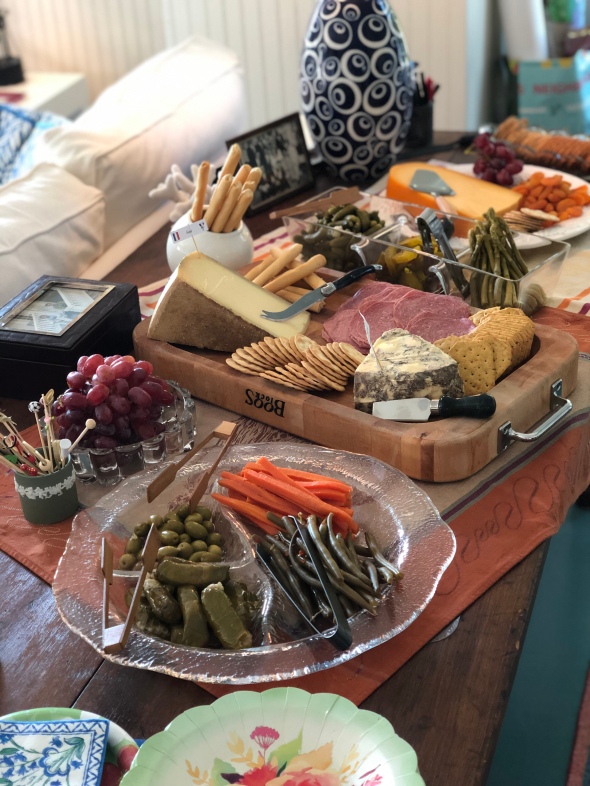 My friends David and John have a darling house in Irvington, VA. They have invited us many times to visit and it just hasn’t worked out that we could make it, until this weekend, for a big party they were throwing. So off to the Northern Neck of Virginia Russ and I drove.

We arrived after lunch to join my old college friend Blair Phillips and her daughter in a house two doors down from John and David. As we drove down King Carter road I recognized David and John’s house from the many photos I had seen on Facebook. We stopped first at their house to see how prep for the party was going and drop off the cheese cake I made for them to serve.

John said everything was ready except for those last minute food prep that couldn’t be done until an hour before the party. Then he pulled four bags of frozen shrimp from the freezer, “When should I thaw these?”

“Honey, you should have called and asked me that question yesterday,” I told him. There was still time to do a quick thaw. Russ and I went off to explore Irvington and I promised to return at five to do the last minute catering.

At the appointed time I came back to lay out the cheese trays with the special cheese David had brought back from his last trip to Belgium. John showed me the now thawed shrimp. “How do these smell?” he asked. I told him I would smell them after they were cooked.

“They are cooked, aren’t they?” I looked at the bowl of giant raw shrimp and said, “Umm, no.”

“But I ate one already.” Thankfully, John is still alive. So are all the other guests because we cooked those shrimp and iced them down before serving dinner.

The party was quite fun with a mix of Irvington folks and friends from DC and a Charlottesville. The cheese spread was a hit, the dinner delicious with us sitting on the lawn at tables in the cool evening air. The dessert spread was orgasmic. I didn’t eat any of the Belgian chocolates because they were too pretty to disturb, but other raved about them.

It was a delightful evening and a good start to what is certain to be a fun weekend at the rivha.