← Really Easing Back Into Reality
Great Day on Bald Head → 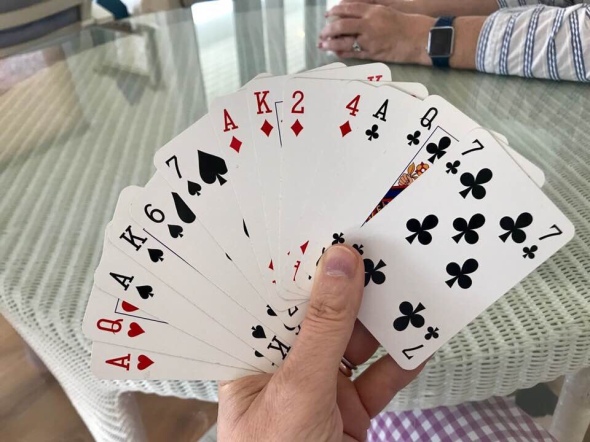 When you are a guest at someone’s house it is always best to leave early and have them pine for your return than late and have them wish you had gone earlier. It also works that as a guest it is best to leave while you are having a great time before you discover you over stayed your welcome and never get asked back.

So sadly I left Bald Head today, leaving my friends to continue their family vacation without me, but not before we packed in all the fun we could. Since I was the fourth, or in lots of cases, the third for bridge, Suzanne, Jack and I decided that we should waste no time doing anything else this morning, not breakfast, not walking on the beach, not swimming, but just get as much bridge in as we could.

Since we were playing three handed we were fairly lenient on each other and so we had lots of good learning moments. Even though I had to pack and Suzanne had to get dressed since she was playing in her pajamas we kept playing “one last hand.” We ended our five days of bridge playing between my house and Bald Head with the best hand ever. Suzanne opened 3 clubs and the bid ended up as a slam at 6 spades, which she played beautifully. It was the perfect ending to our time together and an excellent metaphor for our friendship. All things good and always fun.

Since now it was lunch time and we hadn’t eaten anything all day we loaded my suit case, and two coolers and Scout box I was bringing home, on to the two golf carts and the five of us went to the harbor to grab lunch. I had no time to get sappy about how sad I was about leaving them because just as we finished lunch I realized I could make the next ferry that was leaving in four minutes.

Racing the golf carts over to the ferry the boat guy generously took all my stuff and put them on the boat, I hugged the Farleys goodbye and the boat guy let me get on with one second to spare. It had been a fabulous little get away for me and I was leaving while everyone still liked me.

Driving off alone in my car was a little shock to my system because I didn’t have anyone to tell stories to. I stoped at the fish market in Southport and got a bunch of seafood right off the boat so I utilized my coolers. As I was driving the boring part of I-40, listening to the radio reality was coming back to me. I had avoided all news while I was away and that made for a lovely Trump-free few days.

The good news was I was coming home to Carter, Russ and Shay who make everything in life better. When I got home I told Carter that Suzanne and I thought our whole families should have a vacation together and she said that sounded like a great idea, especially since we had not had time with Suzanne’s oldest child Grace on this vacation.

So thanks to the Worden/Farley clan for including me on their vacation. It was absolutely perfect. I hope the rest of your time on Bald Head is schmired!