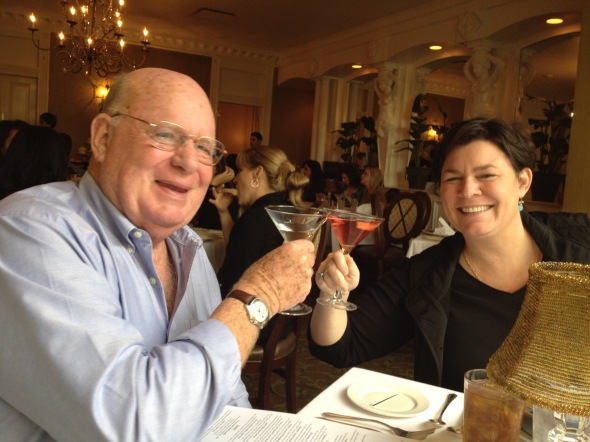 It’s tomorrow in London and since tomorrow is Father’s Day I would like to take this time to wish my father a happy day. Not that I think he has any electronic way to read this blog tomorrow. For my Dad, going to London is about going back in time. Time for him is best spent at his “Local,” that means the pub in his neighborhood. Does not matter if it is just his neighborhood temporarily. He quickly assimilates.
London is the place both my parents can agree on, is their favorite place, but for very different reasons. For my mother it is museums and the theatre. For my dad is lager and Indian food. Our family has spent many happy years living in London, first in the late seventies and early eighties and then again during the middle nineties. When my parents were not living there they were visiting, not just London, but their beloved Cotswolds.
One of my favorite stories was a late afternoon Saturday jaunt to Upper Slaughter, or maybe it was Lower Slaughter. My father was driving the family Volvo Station Wagon through the Cotswolds admiring the beautiful villages. My sisters were in the way back of the car, sightseeing against their will. (They would have preferred to be home in St. John’s Wood watching Dallas on TV. It was 1980 after all.) Also in the car was a work friend of my father’s, Kevin Mc Donald, a New Yorker with the best sense of humor. Seeing no people on the streets Kevin asks, “Where are all the cocktail parties?”
Of course it was in jest, but the idea that it was Saturday, they must be going to a cocktail party was perfect for anyone who hung around with my Dad. So I hope tonight, in London my Dad has had the perfect cocktail and enjoyed his beloved London, or perhaps Broadway I. The Cotswolds.
This photo is one taken of my sister Janet and my father on a trip we took to New Orleans. I don’t seem to have many photos of him drinking in pubs. But it hardly matters where he is, he is happy to make it his “local.”

One Comment on “It’s Already Father’s Day in London”