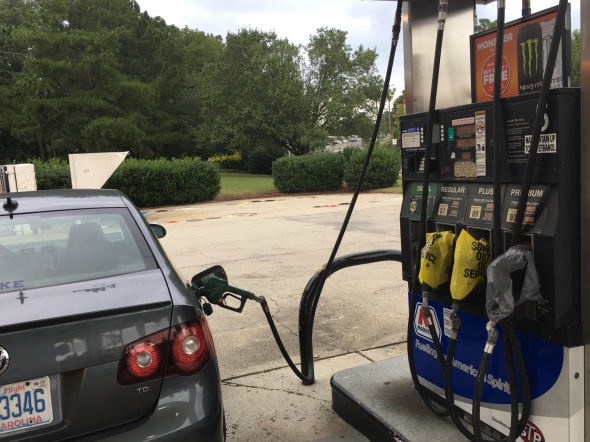 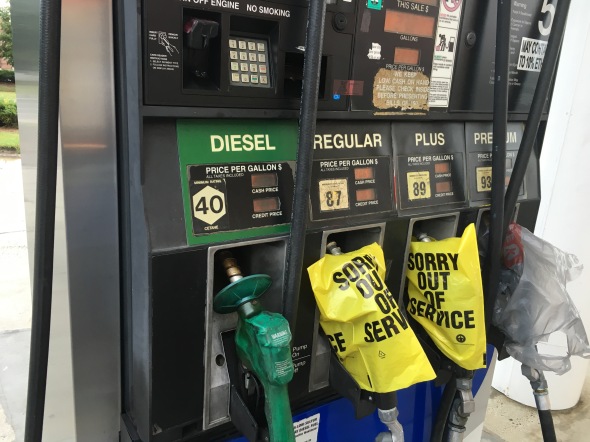 For those of you who live in North Carolina you know all about the break in the Colonial Pipeline that practically cut off the delivery of gasoline to stations in seven states. If you don’t live in one of these mostly southern states count your lucky stars that you probably have a steady supply of petrol.
Last week, when the news reported that the pipe in Alabama had an epic failure and spilled millions of gallons of gas into a state which can hardly afford such a huge environmental disaster I knew things were going to get bad. I had less than half a tank of gas so I went immediately to fill up. It was the right instinct because now, six days later gas is practically impossible to find.
Since Russ also watches the news he filled his gas sipping Smart car up and between us were were set to drive a week or more without curbing our normal activities. What did I do wrong? I forgot to tell my “I get all my news from buss feed” teenager to fill her car.
Yesterday, it finally dawned on me to alert her to what the rest of the south knew. Of course she was already on the bottom side of a quarter of a tank so she stopped at a gas station late last night on her way home from basketball practice.
Carter has one of the soon to be pulled off the road VW diesel cars. The station she stopped at had already run out of gasoline but the woman at the counter said they still had diesel. Only problem was Carter did not have her debit card. Home to get it and back to the station only to find she could only pump .2, that point two, gallons of diesel. The panic set in.
I told her that she could take one of the family fleet cars to school and I would get her car filled today, if possible. This is the type of thing your teenager loves you for.
The thought of finding diesel this morning was not something I was looking forward to since I don’t even know stations that even sell diesel. So I turned to my smart phone and downloaded the “Gas Buddy” app. I was able to filter for stations that had diesel and reported having actual fuel, as well as see what time they reported that. Voila!
I drove directly to a station that was a mile from our house and although they had bags on all the gas pumps the green diesel ones were available. I pulled in, swiped my card, filled Carter’s car and was out in five minutes. The best part is I did not have to wait in any lines since they were out of gas. For once that naughty VW paid off.
Once at home my friend Lynn called from her car that was nearing empty. I pulled up my Gas Buddy and found her a station on her way home that reported having gas. She was car 20 in line when we hung up and I bet the tanks still had enough fuel for her because she did not call me back for a second station.
Our less than popular governor came on the news this morning to say that the pipeline may be fixed by tomorrow and it will take a few days for the flow of gas to get up to North Carolina. I think he wants credit for that happening so when the citizens of our state go to the polls in two months they think about this and not HB2, but sorry I am not giving him credit for the pipe in Alabama getting fixed.
I hope that you southern readers have enough gas to do what you need to do or can use this as a major excuse to stay home. I highly recommend Gas Buddy if you need to find gas. It is out there, it just is taking more work to transport it to the stations from further away. This is not a gas crisis, but a gas delivery crisis.