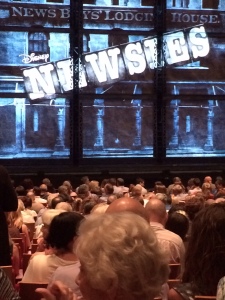 Tonight we went to see Newsies at the Durham Performing Arts Center. It was the last show of the yearly Broadway season. Our seat mates and friends who sit behind us were too overwhelmed or just plain exhausted from school year end/summer beginning activities to make it tonight so we had all their seat. Thanks for you generosity Michelle and Mary Lloyd, you missed a great show.

Carter was thrilled to get to bring her friend Campbell and it was made all the better that they got to sit in seats away from us. The show was great, but for the teenagers the fact that the majority of the cast are attractive young men who can really dance was a huge bonus.

As we left the theatre on a high from watching them flip, tap, spin and fly through the air we had an extra spring in our step. The constant energy that these young performers exerted right through the end was exhilarating for us as spectators.

I can only imagine how many calories these boys burn during every show. How are there are enough hours to eat on days they do two shows, like Saturdays? They certainly did not lack anything during this second show so I bet the cast is out eating right now.

The girls could not stop talking about the boy’s dancing. Let it be a lessons to all the young men who might be interested in girls; learn to dance and you never will be lonely.

In the car on the way home Carter put on the Dirty Dancing soundtrack, just to reinforce her love of watching a good male dancer. I wish that there were more dances for teenagers to go to. We need some kind of dance pavilion that is open every weekend like their used to be at Pawley’s Island back when my Dad was a teenager. Dancing is the best kind of fun.