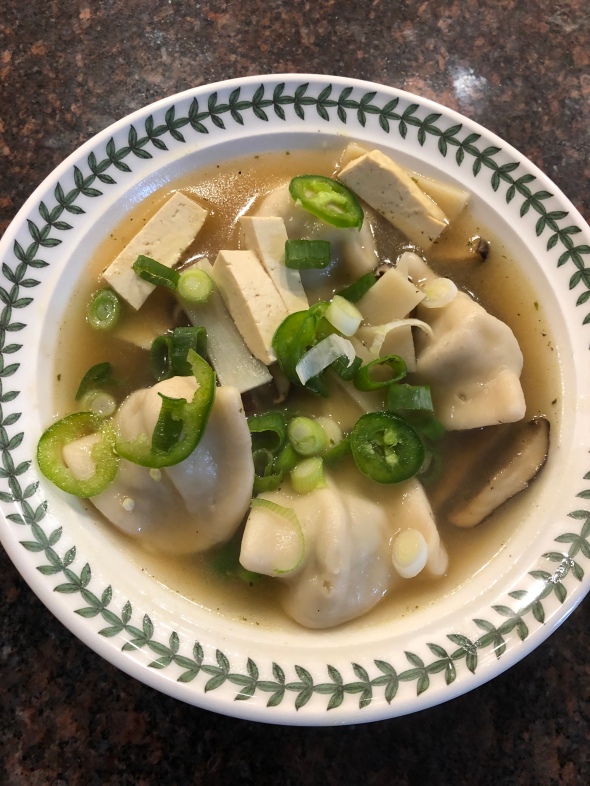 There are not enough dinners in a year for all the recipes that Russ finds online and asks, “Can you make this?” It is such a stupid question. If you give me a recipe certainly I can make it. I don’t always want to make some of his requests, but sometimes they interest me and are healthy enough. I shouldn’t complain because if I give in he almost always does the shopping and that is the part I hate the most.

This morning he showed me a New York Times Hot and Sour Soup with Dumplings recipe. It calls for premade dumplings, which Russ gets at the Asian Market so I gave in. I knew it was a quick recipe that I could make while watching basketball.

One of the ingredients was 2 T. of minced ginger. I told Russ not to buy ginger since I had plenty. Recently I found frozen minced garlic at Trader Joe’s. It comes frozen in one teaspoon cubes that you just pop out of the package. Grating ginger is not really hard, especially if you store the hand of ginger in the freezer, but having it all done is not something I am going to complain about.

I have to give this recipe choice to Russ. The soup was good, healthy and quick. It was much better than any take out version we have around here. I really should listen to Russ more, he is almost always right.