← The Cleaning Out Never Ends
Good Beginning and Good Ending → 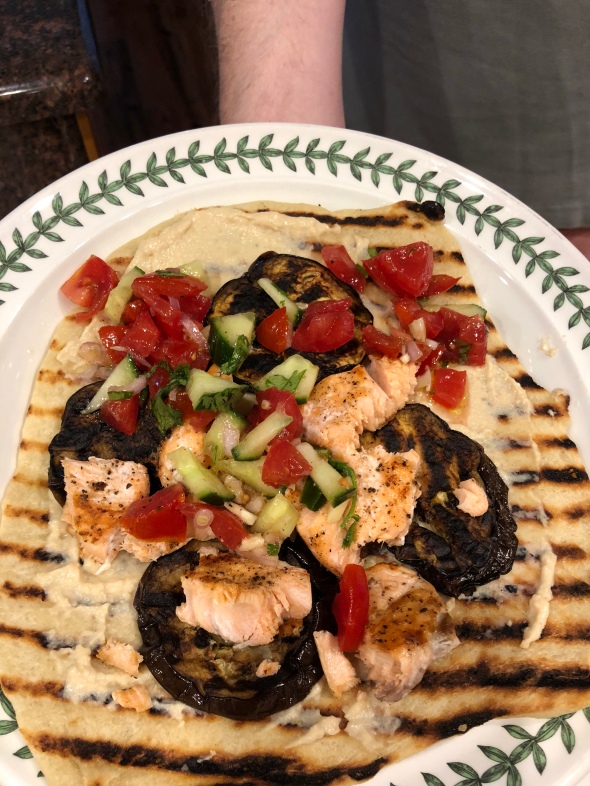 When I was in Atlanta, Kelly and I ate Israeli street food for lunch one day. We both got Chicken Shawarma, which you could have in a bowl, a pita or a laffa. Neither of us knew what a Laffa was so we chose that. It was fantastic.

Laffa is a flat bread that has been grilled. I watched the food prep guy at Yalla assemble our sandwiches, which were more like Israeli burritos. First he took the big round Laffa bread and smeared it with a thin layer of hummus, then a little baba ganoush, what could be bad? Then he put a few slices of cooked eggplant, some thing they called Israelite salad, which was chopped tomatoes, cucumbers, garlic and cilantro, with lemon juice and olive oil, added spit roasted chicken, harissa, tahini and amba, which is mango and vinegar sauce. The combination was perfect.

Tonight for dinner I was going to make salmon and I had some nice tomatoes I needed to use up. I decided to make an open faced Laffa, but with only about half as many things as they did at Yalla because it was only me and Russ. I cooked some eggplant on my cast iron panini pan. I had some hummus and I made my version of Israeli salad. I pan cooked the salmon and so all I had to do was make the Laffa. It was very easy, but took a little time because it had to rise. Russ loved it and has plans for all the leftover Laffa for breakfast, lunch and dinner tomorrow.

This recipe makes about 10 -12 inch Laffa. It would be hard to cut it down because it uses one packet of yeast. But go on and make them. They will keep in the freezer or the fridge.

Put all the dry ingredients in the stand mixer with the dough hook. Mix it all up. Add the wet ingredients and mix on medium speed until all incorporated. If the dough is very wet add a little more flour a bit at a time while the mixer is kneading the dough. You want the dough to pull away from the sides of the bowl and form a ball. It might take up to ten minutes to get it that way.

Take a clean bowl and coat the inside with olive oil. Place the ball of Dough in that new bowl and cover with plastic wrap and then a clean dish towel. Put in the microwave, but don’t turn the microwave on. Leave it there for an hour to rise. If your yeast was new it should double.

After doubling punch it down and divide the dough into ten smaller balls and let rest on a oiled sheet pan for ten minutes. Heat a griddle on the stove to high heat. I used the panini one with raised grates so that it left grill lines.

Take one of the dough balls and roll it out like a pizza and place it on the hot grill pan. Cook one one side for about two- three minutes and then flip it over and cook the other side for about one- two minutes. Repeat with all the other dough balls.

You get a thin flexible bread that is better than a pizza crust, but would make a great pizza

too. It is so much better than pita bread I can’t imagine ever eating pita again.