Camp- A Place to Practice 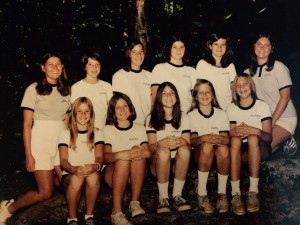 One of the best things about having a daily blog is that it keeps my family up to date on what I am doing.  This makes the calls with my father so fun because he almost always has an opinion, a story or a question about something I have written.  If your calls with your parents are mostly about the weather, their health or family gossip and you would like to change the content of your conversations I suggest you start writing a blog and you no longer will have time to discuss the weather.

Today after my Dad finished telling me his opinion of Denver the topic changed to how important it is for kids to learn self confidence.  He had recently been with some kids he thought needed help learning skills that would serve them well I adulthood.  We both agreed that going to camp is one of the best things that can happen to a kid.

My first camp experience was a weekend type camp with my Girl Scout troop when I was probably in third or fourth grade.  It was a good test for longer sleep away camp, but nothing really like summer camp.  I have one big memory of Girl Scout camping at that age, it was that I could cook food for large numbers of people fast and good and that made me very popular.
There were very few safety rules because I distinctly recall cooking pounds and pounds of bacon in a huge cast iron skillet set right over an open fire all by myself.  My fellow troop mates voted that I do all the cooking after that.

I was so lucky that my grade school friend Tammy Monge who was in my Girl Scout troop went to a great summer camp, Idlepines and convinced me to go too.  I never forgot when I asked my parents if they would send me for the minimum amount of time, a month, that they even considered it.

The woman who owned the New Hampshire camp happen to live in our town so she came over to our house to give us the “camp pitch.”  I was excited about everything she talked about, living in the cabins, swimming in the lake, going on over night canoe trips.  Then I heard the cost.  It seemed like more money than my parents ever had.  I think I went to bed thinking that camp was something I would only dream about.  But my parents said yes and that began my real independence from my parents.   Camp was where I learned to be who I was and not a child of my parents.

It seems like parents today do so much for their kids that they are denying them the chance to learn what they can do for themselves.  Yes, a I am not sure it is a good idea to let an eight year old cook a big pan of greasy bacon over a roaring open fire, but I survived and learned a lot of self reliance from it. It is harder and harder to find ways to let our kids practice grown up skills.  I am thankful that camp still exists and is a place for them to practice.