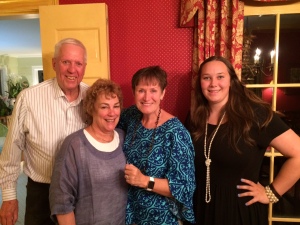 When I was a kid my parents gave me a 10-inch Sony black and white TV for my room. I’m sure they soon regretted that because I almost never came out of my room after that. I was an unapologetic TV junkie. At that time my TV was almost always on channel 7, the New York area ABC affiliate since that was the home of the Brady Bunch and the Partridge Family. I would wake up in the morning to Good Morning America and get all the news before I was off to school.

On weekends when I went on errands with my Dad and we would talk about what was being discussed on the radio my Dad would ask me where I learned some of the stuff I knew, and the answer was always the same, “I learned it from David Hartman on Good Morning America.”

Tonight we had my needlepoint friend Mary and her husband for dinner. Mary is one of my favorite people who always has just read an interesting book or seen something new on TV that she shares with the “Stitching Advisors” as we needlepoint at the table together. She also is a dedicated reader of my blog and is kind to tell me when she has liked a post.

Every once in a while Mary would say something like, “David loved your blog last night,” and I would thank her. The Stitching Advisors may make mention of our husbands, if we have one, but they are rarely the topic of our conversation. So I just accepted Mary’s kind words from her husband with little notice.

One day while happily needlepointing with the Stitching Advisors at Chapel Hill Needlepoint someone asked Mary about a documentary her husband David was working on and then I suddenly came to realize that Mary Putnam Hartman was married to David Hartman, my idolized childhood news source.

Soon after that I had posted a blog about Carter’s photographs and Mary made sure to tell me that David, who is very interested in photography himself, really liked them and would like to meet Carter. Mary and David happened to come visit my church later that month and as I came out I saw them standing in the courtyard. I went to greet Mary and as I approached I saw David was with her. He looked at me just as I was about to introduce myself and he said, “You’re Dana Lange.” My response was, “You’re Mary Putman’s husband.” I’m not sure how often that is how he is greeted, even by someone who was as crushed as I was when he left Good Morning America.

It was lovely of the Hartman’s to come for dinner, but the really exciting part was Carter getting to hear stories about people David interviewed in real time while history was being made, like Kaddafi. David and Mary generously looked at Carter’s photographs and then he got out two books on famous photographers he brought to lend Carter and a DVD of a documentary he made with five famous photographers and a copy of the eulogy he gave at one photographer’s funeral.

I have to say that David Hartman is still as interesting and as good a storyteller as he ever was, but mostly I think he is lucky that he is married to Mary Putman. I know I was happy to have her come for dinner and bring her husband along.