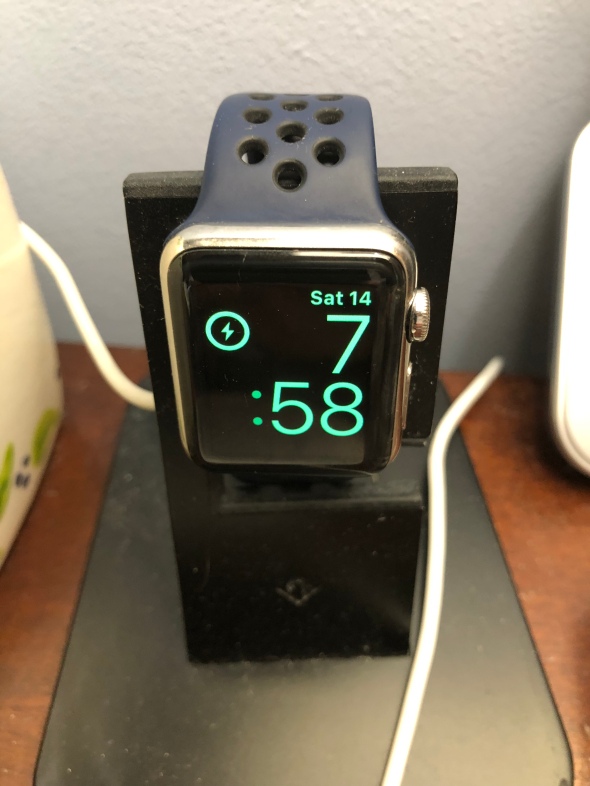 I was an early adopter of the Apple Watch. I wanted it from the moment it was introduced, which was months before it was actually available. Russ is always thrilled if there is an Apple product I am interested in because that means he has a gift idea well before a gifting occasion. Every birthday and Christmas he quizzes me about the condition of all my Apple products. I don’t need the newest, so he is often disappointed when I say my five year old iPad still works perfectly and I don’t want a new one.

This summer my friend told me about the face of her Apple Watch falling off. Since I have had my watch since it was just called “Apple Watch,” (no version numbers when you are the first one) I was looking out for this issue. Sure enough, today as I was entering my password on the face after just putting the watch on I felt a little give on the face. I tried again and I could see the face move. Shoot. I love my original Apple Watch.

Russ made an appointment with the Genius Bar. I knew how this was going to go. My very old watch is years out of warranty and the cost to fix was probably higher than a newer version would cost. We entered the Apple store and it was like Noah’s ark with pairs of every race and nationality on earth waiting in the store. Eventually a non-genius came to help us. I was right. No need to fix it. Russ was sorry it hadn’t broken in November, when he could justify a new watch as a Christmas present.

I thanked the guy and told Russ I would do my best to baby my watch and hope it holds out. Russ wanted to look at the new watches on display. I was shocked that my stainless steel watch, which was the cheapest version when I got it is now a very expensive version, $300 more than the aluminum version, but still cheaper than titanium or ceramic. I quit paying attention at that point.

I hate that I love this watch so much. I had stopped wearing a watch when I stopped working until the Apple Watch came along and now it is hard to go down to the kitchen and get iced tea in the morning without my watch on. Damn you Apple for making me love you.