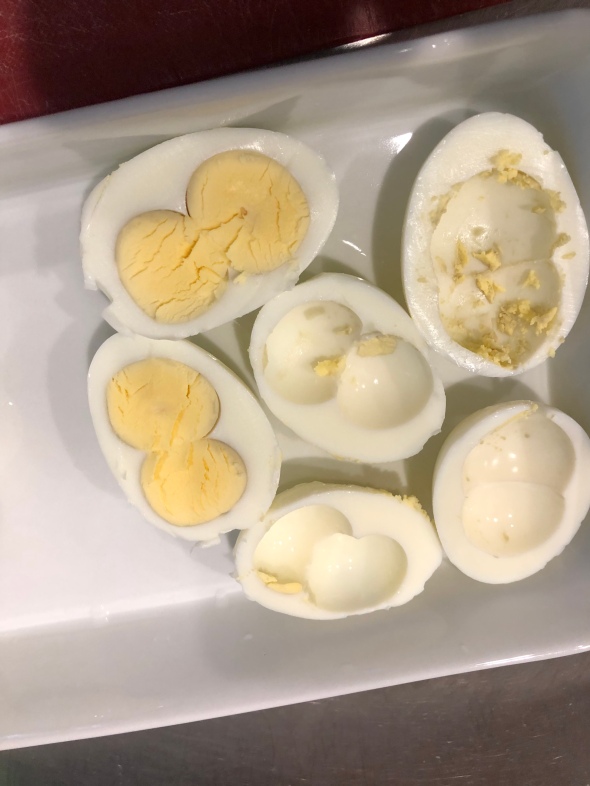 Yesterday I boiled eight Jumbo eggs all from the same carton I picked up at Trader Joe’s. I was making deviled eggs for Mah Jongg lunch today. The eggs were big, as jumbo’s should be, but not out of the ordinary. After boiling and cooling the eggs I started peeling and cutting them in half to remove the yolks. The first one I cut was a double yolk. I showed Carter and we thought it was so cute the way the yolks made double circles in the white.

I peeled and cut the next one, also double yolk. And again…! Five of the eight eggs I had boiled were double yolks. This was not the first time that has happened to me. More than once when I have bought Jumbo eggs at Harris Teeter and if I had one double yolk in the dozen many have.

I wonder if the egg sorters know which ones have doubles and group them all together in the same carton? It can’t possibly be random that there are so many doubles in one, when usually there are only single yolks, even in the jumbo cartons.

I wonder if getting the “Double Bonus Carton” is intended to make the purchaser feel like a winner, because that is how it makes me feel. I am thankful that I was not buying eggs to make meringue because all those extra yolks wold not be welcome. Too bad I was not making hollandaise sauce as it is an all yolk recipe.

I probably should have gone out and bought a lottery ticket as it clearly was my lucky day.