My mother was a Wright and she had two younger sisters. Those three Wright girls had eight children. I am the oldest of those children and the youngest is getting married tomorrow. Those eight children have had seven children so far, (with one more on the way) and the current youngest came this weekend to be introduced to the family.

Russ and I flew up to NJ and drove out to the northwest corner of the state which appears to be a wedding Mecca. We checked into the hotel where the Wright clan (who all being girls have many different names now) and friends are staying. My Aunt Edie and Uncle Bill, the parents of the groom, were waiting in the lobby for their room so we waited with them. Their oldest son, Will was with them, and then their middle son, Wright, arrived with his wife Calvene and their kids JoJo, and newest son, Weaver the five month old. Eventually my Mother, Sister Janet and Sophie arrived.

At check-in the wedding Mecca was apparent as there were hundreds of gift bags for guests of the six different weddings just tonight, that are staying here. Gaggles of girls in matching dresses streamed by us on the way to the wedding venues. There was the beige bride maid party, the maroon and the navy blue.

There was not a traditional rehearsal dinner as all the private rooms were full of actual weddings. Instead my Aunt and Uncle hosted us at a restaurant at the sister resort down the road. Russ and I were taking my Aunt’s life-long best friend Townes and her husband Bob with us. I have known Townes my whole life and she is like a bonus Wright girl.

My mom rode with Sophie and Janet, following us to the resort. We had sketchy instructions on exactly where we were supposed to go and the lack of any street lights did not help. After circling the other resort twice we eventually found our dinner spot.

It was our first chance to see the bride and groom Emily and my cousin Winston. They were calm and ready for this wedding to happen. Clearly the Mecca knows what they are doing and I guess you just pick and bridesmaid color and add water. 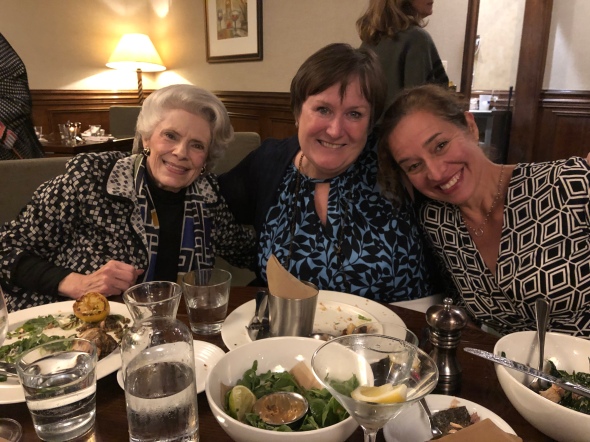 Our dinner table was the most fun. Not that we are competitive, just actually having a great time. We talked and ate and told stories and drank and then we all hit the wall. It was a long travel day. Tomorrow is the big event. Hopefully I will be efficient in finding the wedding venue for the wedding we are actually invited to. Given that Mecca can host so many weddings at the same time you can’t just assume that the woman in the white dress is the one you know.

It is wonderful that we, from age 90 to five months, have all gathered to celebrate Emily and Winston. The Wright Clan is not consistent at gathering together, except for funerals and by then someone is missing. So hooray for a happy event that brings us together in one place, and Mecca makes it easy.